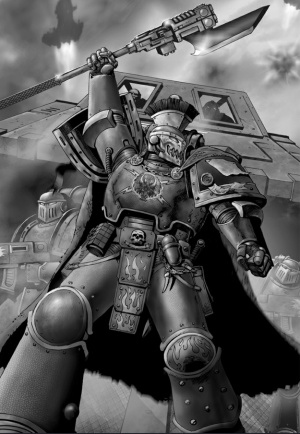 Artellus Numeon was a member of the Salamanders during the Great Crusade and Horus Heresy.

Born on Terra, Numeon was a veteran member of the Legion by the time of the Horus Heresy and served as Captain of the 1st Company Firedrakes, Equerry to the Primarch Vulkan, and commander of the elite Pyre Guard.[1] Following the Drop Site Massacre, Numeon and a small number of Salamanders survived, fearing Vulkan dead (or captured) and vowing to exact vengeance on the traitor forces. Numeon organized the retreat of the remaining Salamanders (as well as surviving Raven Guard and Iron Hands) off Isstvan V and onto the warship Fire Ark. For the next several months, the Fire Ark conducted hit-and-run raids against traitor forces.

Numeon however managed to make his way back to the Fire Ark and was briefly taken prisoner by the Word Bearers until his rescue by the Ultramarines under Aeonid Thiel. Numeon was brought to Macragge where he was reunited not only with several of his Salamander brothers, but also the apparently-dead body of Vulkan. Numeon sunk into a deep depression over the discovery of the fate of his Primarch and refused requests to become the new master of the Salamanders. Instead, aboard the Battle Barge Charybdis he led an expedition back to Nocturne to undertake a ritual he believed would resurrect Vulkan. During the voyage the ship was assaulted by Word Bearers and daemons within the Ruinstorm, but they were seemingly saved by a projection of Magnus the Red. During their brief encounter Magnus asked Numeon what he would be willing to sacrifice to resurrect Vulkan.[3]

Numeon's expedition managed to make it back to Nocturne, but was followed by a Death Guard contingent. After fending off their attempted invasion of Nocturne, Numeon and his brothers interred Vulkan's body within Mount Deathfire, but after a week of waiting the ritual appeared to be a failure. Finally broken by this last setback, and remembering Magnus' words, Numeon stripped himself of his rank and armor and stealthily departed from his brothers before hurling himself into the flames of Mount Deathfire. Though he would now never be reunited with his primarch, Numeon's final sacrifice proved successful and Vulkan soon returned to life.[3]