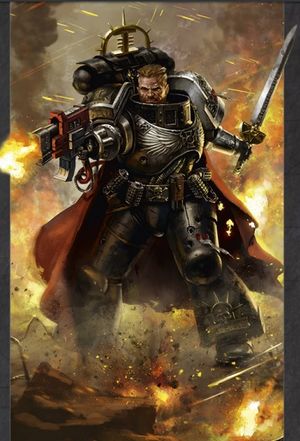 Artemis is a Space Marine of the Mortifactors Space Marine Chapter, currently serving with the Deathwatch as a Watch Captain of Talasa Prime.[6a] He developed uncanny skills for detecting the slightest hint of xenos taint and destroying any alien influence he may find.[Needs Citation]

A veteran of a hundred campaigns, Artemis was recruited into the Mortifactors from barbaric nomadic tribes living on the Feral World of Posul a century before joining the Deathwatch. As a youth, Artemis was one of the greatest warriors of his tribe and paved the floor of his father's lodge with the skeletons of his slain enemies. Gaining many enemies due to his reputation, Artemis was ambushed by fifty warriors from an enemy tribe. Succeeding in killing them all, he nonetheless took heavy wounds and was only saved by the Chaplains of the Mortifactors. Recognized for his strength, he was healed by the Chapter's Apothecaries and began the process of being transformed into a Space Marine.[1]

As a full battle-brother, Artemis quickly distinguished himself and showed great talent in the art of xenos slaying. Such were his skills that he became recognized by the Ordo Xenos, which asked to recruit him into the Deathwatch. Artemis accepted the call and served first under Inquisitor Severnius against Genestealer cults on the Missionary World of St. Capilene, helping save the planet from falling under Tyranid domination. Inquisitor Severnius praised Artemis, promoting him as second-in-command of his kill-team. For two decades he fought alongside Severnius, rooting out alien corruption wherever it may be found. On Varnix Prime, he thwarted a Hrud attempt to capture an Adeptus Mechanicus base and while on the Agri-World of Tarrenhorst he and Severnius discovered an infestation of Warp entities that enslaved entire populations psychically.[1]

It was Brother Artemis who, with his Kill-Team, answered the request from the Colonel of the Kaslon Imperial Guard Regiment on Assumptus V of the Donorian Sector. Deathwatch destroyed K'nibs xenos on this planet and Artemis himself killed Alcayde of this race, thus ending their incursions into Imperial space (though official records said that victory was obtained by the Kaslon regiment).[3]

It was against these new foes that Artemis and Severnius encountered one of their most daunting challenges. The creatures began attempting to psychically dominate the Kill-Team and bend them to their will. Though Severnius was able to physically shield most of the Kill-Team, three Space Marines fell under the aliens' control and turned their Bolters on their brethren. A further two Space Marines were cut down by gunfire, but Artemis persevered and hacked down one of his erstwhile allies as the Kill-Team formed a defensive circle, assailed by hordes of alien-dominated victims. Artemis, Severnius, and the two remaining Space Marines fought viciously and were able to barricade themselves in a small temple dedicated to the Emperor. Severnius by this point was exhausted by having to maintain his psychic shield while the three Space Marines desperately held off enemy attacks. For six days this situation continued until the Kill-Team was able to finally contact Thunderhawk gunships and coordinate a rescue. But before the gunship could land, the weakened Servenius was killed by one of the enslaved Space Marines, and command of the Kill-Team now passed to Artemis. Once on their orbiting ship, Artemis declared Exterminatus and blasted the world with Cyclonic Torpedoes.[1]

In the closing days of the 41st Millennium, Artemis foiled the ritual of Eldar Farseer Eldrad Ulthran in the Battle of Port Demesnus. During the battle, Artemis ignored the pleas of the Farseer to cooperate with him as he planned to destroy Slaanesh, stating that he would rather see humanity fall to Chaos rather than trust the word of a xenos. The act inadvertently saved billions of Human lives.[2]

Artemis continues to serve in the Deathwatch, destroying Xenos infestations wherever he may find them. He has gone on to become one of the most successful members of the Deathwatch, leading Watch Company Tertius of Watch Fortress Talasa Prime.[1][6b]

In battle, Artemis is armed with a special Combi-Flamer named Hellfire Extremis; its flamer component uses bio-alchemical toxic fire, the fuel of which stored in some compartment of his backpack. Artemis lost his right arm in battle with Tyranids so it was replaced with a bionic.[4] He also had a bionic eye with bio-detection capability.[Needs Citation]