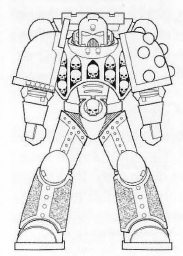 A Space Marine in Artificer Armour[1]

Artificer Armour is the name given to individualised and heavily modified suits of Power Armour. Existing suits of Artificer armour have generally been modified and decorated for a certain individual at point in the Chapters. These suits are kept within the Chapter even after the death of their original wearers and then inherited by high ranking and honoured individuals. Commonly this type of armour incorporates elements of the various "marks" of power armour as well as more unique, customised armour plates and helmets.[Needs Citation]

Suits of Power Armour are difficult to manufacture and so must be maintained in the best possible condition for as long as is possible, hence a Space Marine Chapter may well have a number of archaic suits, which now are kept as heirlooms. Although even the earliest forms of Power Armour are far from obsolete, many of the older suits lack auxiliary systems found in the most recent suits.[Needs Citation]

To maintain, repair and upgrade suits so that they carry the latest systems, the Chapter's Techmarines and Artificers have to constantly work on all the suits that a Chapter owns. Many of the changes made are non-standard and are one-offs for the particular suit they are on, and many additional, purely ornamental adornments are added to recall major campaigns or battles the Chapter has fought in. In time suits become encrusted with unique decorations and individual upgrades and becomes known as Artificer Armour. Because of these heavy modifications, Artificer Armour is often highly superior to newer suits of standard issue Power Armour, and afford much better protection.[Needs Citation]

Nevertheless, Artificer Armour is priceless to a Chapter and wearing it is not undertaken lightly, for it cannot be replaced if it is lost. Only the greatest heroes are entitled to wear such armour on the battlefield, and when a Space Marine does it is often as a symbol of his martial prowess as well as protection, and may even be chosen over Terminator Armour if it is available. However, the Salamanders chapter create more artificer armour than any other chapter, due to their trained skill as craftsmen.[Needs Citation]

The Space Marines of the Adeptus Astartes hold the largest number of suits of Power Armour that could be classified as Artificer, but numbers of suits of similar quality have been acquired by high ranking members of the Inquisition, who often collect such items in their line of work.[Needs Citation]