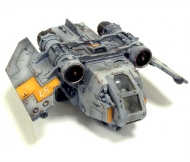 The Arvus Lighter is a light cargo hauler used by the Imperial Navy to transport personnel and supplies. One of a wide variety of pinnaces, brigs, couriers and dories used by the Navy, the Arvus Lighter is the equivalent of the Imperial Guard's Trojan, fulfilling many of the same roles. Like the Trojan the Arvus has many affectionate nicknames such as "the Hog," "the Little Pig" and "the Onager," and though their origin is unknown Navy superstition holds that the craft's machine spirit is truculent and stubborn.[1]

The Arvus is a small, solid, reliable workhorse utility cargo shuttle, used by the ships of the Imperial Navy for transferring cargos of supplies or small units of personnel from ship-to-ship or ship-to-planet. Squat and durable, the Arvus has two powerful engines for carrying heavy loads. It has no armaments and is not expected to engage the enemy. It is commonly seen on the decks of large Imperial Navy ships or making repeat runs from surface to ship transporting supplies and men.[1]

As standard the Arvus is unarmed, intended to discourage pilots from getting involved in a fight they should avoid instead, although some will be modified to carry weapons when operating on hostile worlds. A wide variety of other adaptations also exist for the lighter, such as converting the cargo hold to carry fuel and turning it into a tanker or elongating the hull to carry more cargo at the expense of speed and handling. In need it can also be used as an assault boat, although it is not designed for this purpose. [1]

The ship's interior is very basic and does not include many advanced systems beyond standard navigational and sensor equipment and proximity alarms. It is crewed by a single pilot who controls the ship from a small cramped cockpit, connected to the cargo compartment by a small hatchway. The cockpit's screen can also swing up to allow access from the front, while the cargo compartment can be accessed by the rear ramp and transport twelve individuals. Some Arvus Lighters can also be fitted with an Ejector Seat, Flare or Chaff Launchers, an Armoured Cockpit or Illum Flares.[1]