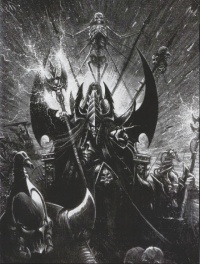 Asdrubael Vect, lord of the Kabal of the Black Heart

Asdrubael Vect is the leader of the Kabal of the Black Heart, the most powerful Dark Eldar Kabal in existence, thus he is therefore de-facto ruler of the city of Commorragh and the rest of the Dark Eldar race as a whole.

Vect claims to have witnessed the Fall of the Eldar personally; if this is true, he is quite possibly one of the oldest living (mortal) beings in the Galaxy at well over 10,000 years of age. As a consequence of this, surviving for that length of time as the ruler of Commorragh would also make him one of the deadliest individuals in the galaxy. One of his ways of ensuring his security is the Geldling, a mysterious doppelgänger which he uses from time to time as his substitute.[3]

Vect was born a lowly slave in Commorragh. Carving a bloody path through the city using a combination of deception and his own wits, Vect climbed the ladder of Commorragh and founded the Kabal of the Black Heart. By the time the arrogant nobility of Commorragh acknowledged that the low-born Vect could pose a legitimate threat, it was too late and Vect had forcibly united the disparate sub-realms of the Dark City into his fold.[2a] Vect then captured the Salamanders Space Marine Strike Cruiser Forgehammer, which provoked an Imperial invasion of Commorragh itself. In the ensuing battle, the Lords of Commorragh were killed by the vengeful Space Marine forces and Vect emerged as the undisputed ruler of the Dark City.[2b]

In M41, Vect faced a major threat to his power when El'Uriaq, the tyrant of Shaa-Dom, was resurrected by rival Kabals, led by Xelian, Kraillach, and Yllithian.[4] Later during the closing years of the Millennium, Vect was forced to retreat to the outskirts of Commorragh after the birth of Yvraine caused a massive Dysjunction that threatens to destroy the Dark City. Vect maintains an uneasy alliance with his remaining Kabals, desperately seeking Yvraine for his own ends.[5]

Following the birth of the prophet of Ynnead, Yvraine, around the time of the Thirteenth Black Crusade, Commorragh was devastated and flooded by Daemons. Vect only appeared in the later stages of the battle after all seemed lost, calling in old debts and rallying the Incubi sect to launch a massive counterattack that saved the heart of Commorragh. However, shortly after, Vect was cut down by Mandrakes serving an unknown master.[6]

Following the death of Vect, a funeral by the Harlequins of the Masque of the Veiled Path was organized and attended by many Archon friends and foes of Vect. However, at the crescendo of the service, the Archons were massacred by the Harlequins in a bloody spectacle. Their blood was used to resurrect Vect, who became reborn with a perfect body imbued with a new "dark power". After the massacre the Prophets of Flesh resurrected many of the dead; however, although all who remained faithful to Vect were resurrected to full health, some of his enemies were reborn as mere slaves to Vect's will - becoming grotesque abominations and twisted monstrosities for Vect's amusement and to make an eternal mockery of them. Vect declared himself a living Dark Muse, his position now unassailable. His only remaining threat was from Yvraine herself, and Vect began to make plans to end the Reborn prophet.[6] He has instigated the Dark Eldar Civil War as a means to quash Ynnari influence within Commorragh.[7]

When Vect deigns to enter battle personally, he usually does so upon his Dais of Destruction, a modified Ravager equipped with a unique force field that protects its riders from harm. When on foot, Vect fights protected by a Shadowfield, slaying his enemies with extremely advanced soul-tech orbs known as Obsidian Orbs. These spheres are able to heal Vect from the terror of others.[2a]

In melee, he fights with the Sceptre of the Dark City, an ornate mark of office containing sophisticated pain-inducers.[2a]

In the video game Warhammer 40,000: Dawn of War - Soulstorm, Asdrubael Vect leads the Kabal of the Black Heart in the Kaurava Campaign. His underling, Archon Tahril, is the playable commander for the Dark Eldar campaign, but Vect and his Dais of Destruction are enemy characters if any other faction assaults the Dark Eldar fortress.[1]

Asdrubael Vect is one of only three canon characters to appear in the Dawn of War game series, along with Captain Gabriel Angelos and Abaddon the Despoiler.[Needs Citation] 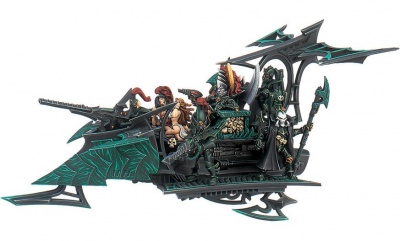 Asdrubael Vect upon his Dais of Destruction