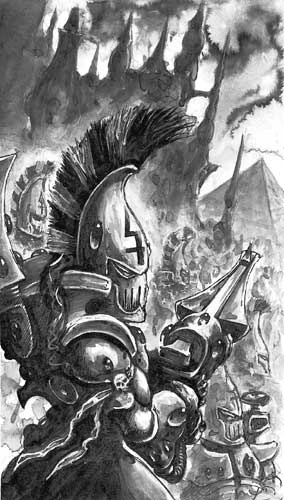 The real military strength of the Eldar armies derives from their highly specialized Aspect Warriors. These Eldar are walking the Path of the Warrior. Once an Eldar has chosen to tread this path he joins a specific Aspect Shrine. There, Exarchs train them in a specific aspect of warfare.

Each Warrior Aspect represents one, very specific aspect of warfare. As Kaela Mensha Khaine is the god of war, each Aspect embodies a facet of the god. Each shrine was founded millennia ago by a single Phoenix Lord. It is impossible to say how many different Aspects there are. The most common Aspects have shrines on most Craftworlds, while some Aspects are unique to a particular Craftworld - such as the weirdly terrifying Slicing Orbs of Zandros, which are confined to a single shrine on a single craftworld.[2]

Exarchs are former aspect warriors who have lost themselves upon the Path of the Warrior and are unable to ever leave it again. They become Exarchs: simultaneously priests of Khaine, caretakers of individual shrines, and trainers, teachers, and instructors of the respective aspect. They are equipped with very ancient weaponry and armour. Each aspect has its own particular kind of Exarch. On the battlefield an Exarch commands an individual squad of aspect warriors. Exarchs are formidable warriors, and most of them can use their abilities to help the whole squad of aspect warriors under their command.

The Aspects in Closer Detail