The Heritor Asphodel does not trouble us because he was one of us. We have dealt with apostates before. Your maker's crime is that he breaks the symmetry between ourselves and the Antithesis. He is a third vertex in a cosmos that our faith tells us is defined by a single axis. No divine inspiration, no reclamation of knowledge that the Omnissiah laid down in the great ages of reason from which we walked into the Old Night. A man. A single, unfathomably brilliant autodidact. Where in our calculus is there a place for such a one as this?
Magos Galhoulin Tey, on the Heritor.[3] 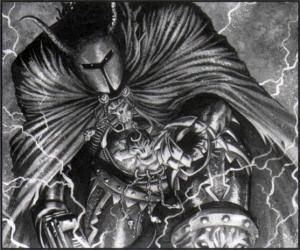 Heritor Asphodel was a Magister in the Chaos forces commanded by Archon Nadzybar during the Sabbat Worlds Crusade.

Though his background is mostly unclear, it is known that Asphodel was one of the greatest minds of his age. He lacked connections to either the Adeptus Mechanicus or the Dark Mechanicum, and instead became a brilliant engineer and inventor by simple study and experimentation. As a result, the Adeptus Mechanicus considered him an even greater abomination than "normal" Chaos-corrupted Mechanicus adepts, as he did not rely on anything which had come before.[3]

It is not known how or why Asphodel joined the forces of Chaos.[3] He first came to Imperial notice during the wars for Ashek II.[2b] He arrived on the world on a spaceship known as "Crow-Hand", and overran the planet's massive defenses by building so-called "woe machines"; the most powerful of these, the "Hammerstone Kings", were Ordinatus-equivalents. Even though his creations were already twisted and murderous, Asphodel's woe machines were not yet Chaos-corrupted by this point. After conquering Ashek II, Asphodel redirected the planet's industrial output to construct more technical wonders. One of his greatest inventions, the "Inheritor King", was created during this period. It was not just a war machine, but a true Artificial Intelligence.[3]

In 756.M41, the Imperium launched a counter-offensive to retake Ashek II. Expecting a swift campaign, the Imperials instead faced a cataclysmic war, as Asphodel's woe machines devestated their ranks. Indeed, much of Ashek II's population had become loyal to his cause, and firecely resisted as well. The Imperium only gained the upper hand after destroying the Crow-Hand, and defeating the Hammerstone Kings with the aid of Legio Tempestus in 757.M41. Despite this, Asphodel was able to flee the planet.[2b][3] He had to leave the yet-uncompleted Inheritor King behind; the A.I. consequently became dormant.[3]

In the following years, Asphodel rose to one of leading Chaos commanders in the Sabbat Worlds. He began to integrate Chaos magic into his designs,[3] and enlisted a bodyguard of Chaos Champions known as the Darkwatch.[1d] As the Sabbat Worlds Crusade continued, his woe machines became an increasingly prominent and potent force on the battlefield.[3] His application of technology was so notable that there was some conjecture by the Imperium that he may had once had a connection to the Adeptus Mechanicus[2b] and was a Dark Mechanicum Magos; the Adeptus Mechanicus deliberately cultivated these false rumours, as the actual truth about Asphodel was considered even more dangerous to the Cult Mechanicus.[3]

Despite eventually becoming a Magister (an Archenemy commander's title analogous to lieutenant warlord), Asphodel preferred the title of "Heritor," in recognition of his philosophy and sworn intent to "inherit" Imperial worlds and return them to the "true state" of Chaos.[1a][2a] Considered the most tactically gifted of the Magisters serving under Nadzybar (with the possible exception of Anakwanar Sek[1a]), caused untold suffering to the Imperium.[3] 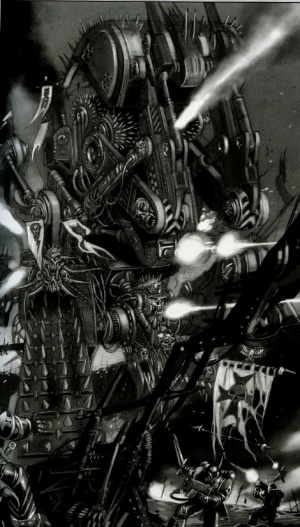 A "Woe Machine" encountered by the Imperial forces on Ashek II.[2c]

Asphodel later participated in the battle on Balhaut, although he fled the world before the final collapse of the Chaos forces, and Nadzybar's death at the hands of Warmaster Slaydo.[1d] After the battle, the Imperial forces discovered the abandoned remnants of Asphodel's hellish experiments on thousands of human test subjects; along with the discovery of Sholen Skara's murder-camps, the sight drove many Guardsmen insane, and many more swore to track down the Heritor and destroy him.[2d]

After dropping out of sight for a period, the Heritor travelled to the Hive World of Verghast in 769.M41, where he corrupted the population of Ferrozoica Hive and led the entire population (approximately 13,000,000) in an effort to wipe out their former rival, Vervunhive (whose population was three times larger, but could only field about 500,000 troops). The Heritor led the assault against Vervunhive from a spire-like command vehicle that served as the mobile source of the comm chatter that enraptured the Zoican forces (as well as Salvador Sondar, High Master of Vervunhive, whose mind was connected to the hive's systems - which the Heritor used to his advantage).[1b]

In the closing stages of the war Colonel-Commissar Ibram Gaunt, commanding Vervunhive's defenses, led a group of Scratch Company troopers, Royal Volpone and his own Tanith First and Only against the Heritor's command vehicle, known as "the Spike".[1c] Facing Asphodel in single combat, Gaunt ran the Sword of Heironymo through his enemy just as the Heritor's bolt pistol shot the Colonel-Commissar through the heart (only the chance location of a steel rose given to Gaunt by one of Vervunhive's nobles, worn at his lapel, prevented his death).[1d] After the arrival of reinforcements led by Warmaster Macaroth, the Imperial Fists Space Marine Chapter ceremonially incinerated the Spike - along with the Heritor's corpse.[1e]

Many of Asphodel's inventions would continue to plague the Imperium for decades. On Ashek II, his loyalists would wage a guerrilla war against the Imperials, eventually succeeding in reactivating the Inheritor King. The latter attempted to reunite with its inventor, not knowning of his demise, and tried to hijack the mind of Magos Galhoulin Tey. However, Tey had suspected the machine's true nature, prepared for it, and ultimately destroyed it.[3] About two decades after Asphodel's death, two woe machines (which had been disguised as humans on Verghast), activated on Urdesh, almost killing the Imperial high command of the Sabbat Worlds Crusade and taking bloody revenge on the Tanith First and Only.[4]