And of the Assault Marine so do I decree:

He shall descend upon the perfidious foe as an Angel of Judgment from on high. Let the jump pack be his wings, and the roar of its engines a hymn of retribution.

Let the chainsword be his sceptre of decree, its harsh voice singing joyfully with each and every blow. With it shall the Assault Marine bring bloody retribution to the heretic, the traitor, and all alien aggressors who trespass on the Emperor's domain.

So will the Assault Marine be the hunter of warlords and the slayer of kings. His armour shall run slick with the life-blood of the vanquished, and all shall honour his name.

Roboute Guilliman, quoted in the Apocrypha of Skaros[1a] 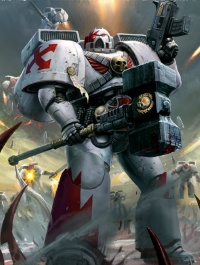 An Assault Squad is a Firstborn[5] Space Marine unit that excels at close combat.[1a] In a typical Codex Chapter, two Assault Squads make up part of each of the four Battle Companies, and the entire 8th Reserve Company is composed of Assault Squads[1b], meaning such a chapter has 18 Assault Squads.

Marines are commonly assigned to Assault Squads after exemplary service in a Devastator Squad, where they have garnered experience in holding their ground against any foe.[1a] As an Assault Marine, they must not only prove themselves in close combat, but learn other vital skills, such as the operation and maintenance of Space Marine Bikes and Land Speeders. Assault Squads are used for a variety of roles; reconnaissance-in-force, decapitation strikes, and counter-assault missions are common assignments for Assault Squads.[1a]

The Assault Squad is made up of four to nine Assault Marines, led by a Space Marine Sergeant[1c]. Because they often operate far ahead of the main force, the Sergeant has a direct uplink to the myriad datastreams and tactical overlays used to coordinate the Space Marine army, allowing for complete situational awareness.[1a]

Besides their power armour, Assault Marines are commonly armed with a bolt pistol, chainsword, frag and krak grenades, and equipped with jump packs. These jump packs not only allow them to quickly traverse dangerous terrain with ease, but also for controlled low-altitude descents from Thunderhawk Gunships.[1a] When required, the Assault Marines may forgo their jump packs, instead riding into battle in a Rhino or Drop Pod[1c]. One squadmate may replace his bolt pistol and carry a flamer instead, while another can replace his for a plasma pistol[1c].

The Sergeant can also carry melta bombs and a combat shield into battle. He can also replace his bolt pistol and/or chainsword with a storm shield, plasma pistol, grav-pistol, power weapon, power fist, Eviscerator, thunder hammer, and either one or a pair of lightning claws[1c].

Within the Space Wolves Chapter, Assault Squads are known as Skyclaws. Unlike their counterparts in Codex Chapters, most Skyclaws are Neophytes (called Blood Claws by the Chapter) whose first exposure to combat as a Space Marine is with close-combat weapons; Skyclaws are those Blood Claws who have demonstrated special aptitude for close quarters battle and the use of Jump Packs.[2]

Due to the mostly aggressive style of warfare of the Blood Angels, scouts, after graduating, join the ranks of Assault Squads, rather than the Devastator Squads, as is demanded in the Codex Astartes.[4]