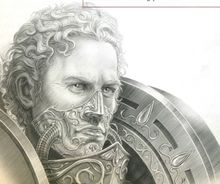 Aster Crohne was a Centurion in the Blood Angels Legion's 94th Company during the Great Crusade.

A veteran of the Blood Angels, Crohne served in the Legion in the days before the coming of Sanguinius. Recruited from the killing fields of Saiph, as a child, it is said none survived as many massacres and slaughters of Aster Crohne. He was among the few of his tribe from the wastes of his homeworld to survive recruitment into the Legion. He became known for his survival skills and bloody-minded tenacity that defied belief even within the IXth Legion. Upon the coming of Sanguinius and the reformation of the Legion from a force of bloodthirsty killers to that of noble warriors, Crohne was seen as a relic and garnered little favor from the new elite of his Legion, lingering as the rank of Judiciar.[1c]

He later became the 94th Company's brevetted commander[1a], after Archein Malaci was killed in the Inconnu Campaign[1b] and, due to no replacement having been chosen, Crohne led the Company in the Battle of Signus Prime.[1a] During the war on Signus he was one of the few Blood Angels to maintain his sanity and not succumb to the Red Thirst. Despite this, he remained an outcast among his peers, a symbol of the failings of the Blood Angels during Signus.[1c]