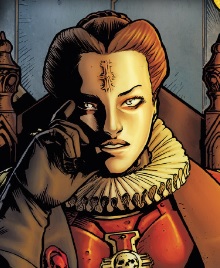 Astor Sabbathiel is an Inquisitor of the Ordo Hereticus, determined to expose the Dark Angels Chapter as the heretics she believes they are.[1b]

Astor Sabbathiel first encountered the Dark Angels on Heorath, where she witnessed one of the Fallen working with daemons in the subterranean caverns. Believing the entire Chapter was corrupt, she vowed to expose their treachery to the Imperium.[3]

Five decades later,[3] a daemonhost she keeps in the hold of her ship informed her that the warp-storms shrouding the Calaphrax Cluster had abated in for the first time in ten millennia, and the Dark Angels would seek to obfuscate the truth that might be discovered there.[1a] When she and her retinue arrived in the Exyrion system, they investigated an orbital observation station, discovering the bodies of several Dark Angels fallen in battle.[1c] Sabbathiel identified the cause of death as bolter-fire as her acolyte Fitch detected the impact of the asteroid launched at the surface of Exyrion - and the Iron Warriors fleet that had launched it.[1d] She departed to Quintus, where her daemonhost had shown her visions of a Chaos Cult apparently led by the Dark Angels.[2a] After slaughtering the cultists, she found an ancient suit of black Dark Angels power armour used as an icon of worship, but it fell into a chasm in the fallout from the Battle of Quintus.[2b]

Convinced she had enough evidence to expose the Dark Angels, Sabbathiel summoned the Grey Knights. Justicar Leofric, in the Calaphrax Cluster due to the visions of the Prognosticators, agreed to meet with her and decided that her evidence was sufficient to merit investigation. Sabbathiel accompanied the Grey Knights as they demanded Master Seraphus allow them to board his Battle Barge to conduct their investigation.[3]

Ultimately, Sabbathiel was executed by Leofric after it became apparent that she was consorting with Daemons.[3a]