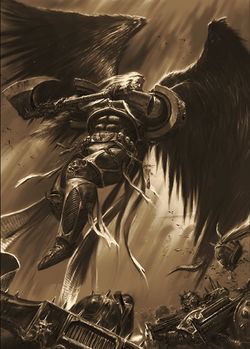 Astorath is a figure both revered and loathed within the ranks of the Chapter due to the duty he performs: as the Redeemer of the Lost, he must seek out those battle-brothers completely claimed by the Black Rage, and end their suffering with a blow from his axe. As a result no battle-brother can feel entirely comfortable in his presence, as one day it might be their neck at the receiving end of his blade.[1a]

While his duties ultimately lie with his Chapter, Astorath also dispenses the final mercy of oblivion to those lost to the Rage in all Blood Angel Successor Chapters. As such he is always on the move, his grim duty bringing him to wherever the Sons of Sanguinius battle.[1a]

A less-keen observer might mistake Astorath's presence on the battlefield as actually exacerbating the Black Rage in his brothers, but the truth is actually quite the opposite; Astorath can sense the onset of the Black Rage in brother Marines before any visible signs manifest, and as such appears on those forlorn battlefields where he fights to lead these doomed individuals in one last glorious charge before the Flaw completely overtakes their sanity.[1a]

Astorath is armed with the Executioner's Axe, a two-handed Power Axe so keen it could slice through power fields, and is clad in crimson-coloured Artificer Armour equipped with a black-winged Jump Pack. As a Chaplain he is also equipped with a Rosarius, as well as frag and krak grenades.[1b]

"Treat them with honour, my Brothers. Not because they will bring us victory this day, but because their fate will one day be ours."[1d] 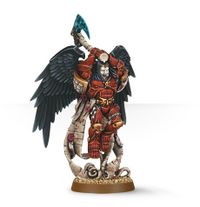 Astorath the Grim, Redeemer of the Lost