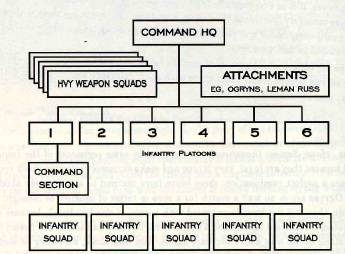 Structure of an Imperial Guard Company[9]

A Company is a common term for the primary fighting unit of most Imperial Guard Regiments.

The size and composition of Imperial Guard regiments is not standardised across the Imperium; the number of individual Guardsmen alone can vary enormously between regiments, with some only a few hundred strong at founding-strength, whilst others possess tens of thousands of fighting troops.[1] This non-standardisation is reflected in the organisation of Imperial Guard companies, which can vary in numbers and composition just as much as regiments.

A company tends to have a command staff of its own, with the Company Commanding Officer notionally being ranked as Captain, or some equivalent. This is not universal, however. Depending on regimental organisation, it has been known for companies to be - intentionally - commanded by ranks anywhere from Colonel to Sergeant. Companies tend to be made up of smaller units again, notionally, called platoons (which in turn are made up of squads). Some companies have been observed which do not appear to use the 'traditional' platoon/squad organisation and instead appear to exist as a single entity with squads and details being formed, broken up and re-formed when necessary.[2]

Additionally, companies reflect their parent regiment; it is likely - though not always the case - that the battlefield role of a company matches that of the regiment as a whole. Thus, a company belonging to a Light Infantry regiment is likely to be equipped and outfitted as Light Infantry. However, companies can be detached from their regiment and attached to another (either as a temporary measure or permanently) or seconded to other branches of the Imperium, such as the Inquisition, creating a more varied fighting unit.[3] 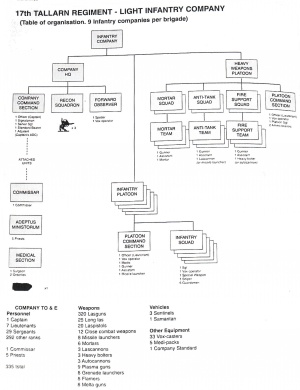 A Light Infantry Company of the 17th Tallarn Desert Raiders

Infantry companies consist of between two and six platoons (which themselves are made up of between two to six squads) plus command staff and attached support units. The fighting strength of each company is therefore highly variable, especially between regiments, and totally accurate figures are difficult to pin down at any one time. When 12 companies of the Cadian 8th Shock Troops paraded led by Lord Castellan Ursarkar E. Creed, just under 4,000 soldiers were present. This gives a rough company strength of over 300 Guardsmen each.[3] The organisation of infantry companies is mirrored to an extent in that of Light, Heavy, Drop and Mechanised companies.

In some infantry regiments, Heavy Weapons Squads are organized into their own formations, called Heavy Weapons Companies. While administratively separate, common practice still has their individual squads attached to other units to provide supporting fire. However, on some occasions the heavy weapons company will take to the field of battle as a coherent fighting unit, tasked with the destruction of huge concentrations of enemy troops or massive engines of war. Their combination of various specialised heavy weapons working together ensures their ability to take down a diverse array of enemy forces.[8]

An armoured company is typically made up of between 12 and 24 fighting vehicles (such as Leman Russ Battle Tanks) but may have additional support in the form of Armoured Fist Squads or other mobile support/reconnaissance units. These units tend to be grouped into squadrons of 3 vehicles for the purposes of administrative and battlefield control.[4]

Commissars attached to armoured companies may be forced by the company organisation to take to the field in armoured vehicles of their own. These vehicles are simply known as Commissar Tanks and tend to be a variant of the Russ or Salamander Scout Vehicle.[4]

Also known as Super Heavy Tank Companies, these formations are a variant of armoured company either exclusively or mostly made up of Super Heavy Tanks. Containing up to 3 Super Heavy Tanks, these companies are often attached to other regiments in order to bolster their fighting power and are treated as independent formations in many ways.[5]

An artillery company is normally composed of three batteries of three pieces each plus a command vehicle, either a Chimera or Salamander Command Vehicle. Typically the company will use Basilisks, though it may also include Medusa or Griffon batteries, as well as towed versions of each (in which case each gun is towed by a dedicated Trojan vehicle). Artillery companies are used to support other Imperial Guard formations with long-ranged firepower, and when self-propelled can easily keep up with an advance deep into enemy territory. They are sometimes known as the 'Emperor's Fury' or 'Emperor's Wrath' companies.[6][7]

These companies contain some of the Imperial Guard's heaviest weapons, including the Bombard and Manticore. They are typically made up of two batteries of three guns each plus the command vehicle. Known sometimes as the 'Emperor's Thunder', heavy artillery companies are brought to bear against the enemy's strong points and reduce them to rubble through sustained bombardment.[7]

Field artillery companies have the same composition as normal artillery companies but employ Heavy Quad-Launchers and Heavy Mortars, which can be towed by either Trojans or Centaurs. However these formations, sometimes called 'Avenger' companies, have fallen out of favor over the years, due to their static nature and weak firepower. Therefore they are most often deployed by PDFs and Siege Regiments.[7]