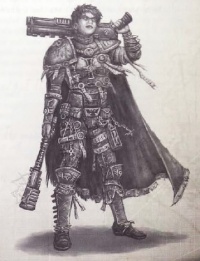 Astrid Skane was an Adeptus Arbites Judge who became famous amongst the Inquisition of the Calixis Sector, when she rooted out a series of pleasure cults amongst the nobility of Scintilla’s hives. She had found herself fighting a lonely battle against adversaries wielding power both political and martial, but she persevered in her task. Skane's success (with aid from several allies of the Tricorn Palace) saw her inducted into the ranks of the Ordo Calixis as an Acolyte and eventually elevated to the status of Inquisitor.[1]

She now serves in the Ordo Hereticus and has become a Recongregator, who dreams of a future where justice in the Imperium is a rule rather than the exception. She believes that the Tyrant Star's appearance is due to some sort of Cult activity.[2]