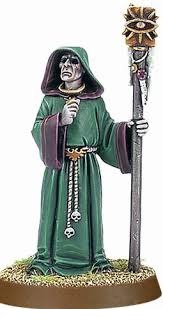 An Astropath (portmanteau of "astro" and "telepath"[1a]) is a specially-trained psychic servant of the Imperium belonging to the Adeptus Astra Telepathica. Capable of sending and receiving psychic messages across interstellar space, they form the Imperium's vast communications network, and are vital for keeping its widely scattered worlds connected.[1a]

The history of the Astropaths has been filled with strife.

Astropaths are psykers collected by the Imperium's Black Ships whose powers are considerable, but who lack the mental strength to resist the dangers of the Warp.[2a]

They are trained at the Adeptus Astra Telepathica, where they undergo years of training and extensive indoctrination. At the end of this period, they undergo a techno-arcane ritual, known as Soul Binding.[1b][2a][2b] They prepare for months, fasting and praying; then they are brought a hundred at a time in procession to the Emperor's Palace and the ritual takes place[2b]: they kneel before the Emperor and he himself (being the only psyker powerful enough to complete such a task) reshapes their very minds.[1a]

On one side, Soul Binding shapes their powers, allowing them to safely interact with the Warp and to broadcast messages through it[2a] and preventing them from being tainted by the Warp[2b]: they resist easier than other psykers to daemonic possession and daemons' powers and they are even less prone to the Perils of the Warp.[2c] In fact, after the ritual they are linked to the Emperor[2b] and their new abilities are a result of the combination of their powers with a fraction of the Emperor's.[2a]

On the other side, Soul Binding is not an absolutely safe measure, so Astropaths still face the risk of succumbing to daemons[3a]. In addition, during the ritual they must endure several hours of agony[1a], resulting in real trauma[3a]. In general, all have their personalities altered to some extent[1a]. Touching the mind of the God-Emperor himself is also such an intense sensory experience that it completely overloads their sensory organs, to the point that some of the Astropaths are killed or driven insane during the process. Those who survive are permanently blinded and most of them even suffer from nerve damage, which results in a loss of smell, touch or hearing.[1c][2b] Although blinded, Astropaths make up for their sensory lacks with the help of their psychic abilities[2a]: they develop a sort of "near-sense", which means that few of them choose to have mechanical eyes implanted[1c]

Although Psychic powers are in fact limitless, Astropaths usually develop some techniques along three major disciplines: telepathy, divination and telekinesis.[2c]

Astropaths' long-range communication ability (astro-telecommunication[4a]) is superior to that of common telepaths.[2g] In fact, after Soul Binding Astropaths are able to use the whole Warp as a medium[2g] and communicate with others of their kin[3b], being in fact the only psykers capable of doing so.[3a] The whole process of sending and receiving messages cannot be done instantly, but requires concentration, meditation and freedom from distraction: a message can take up to five hours to be sent at an interstellar distance.[2g] In order to prevent the Warp from changing or damaging data, messages are quantified and encrypted during sending; however, even if precautions are taken, messages still suffer from disturbances.[2g]

A message travels through the Warp in a time whose length depends on target's distance: messages sent to targets belonging to the same orbit are received instantly, while Astropaths in the same system or in a nearby one are reached in minutes; on the other hand, communications between Subsectors require hours, those between Sectors take weeks, and inter-Segmentum messages reach their destination in months.[2h]

In order to enhance their own chances of sending messages in a fast and secure way, Astropaths form Astropathic Choirs[2h] - a method established during the Forging.[4b] In a Choir, each chorister lends a fraction of his or her power to the choir which it is used like a wave to buoy the message into the warp.[5] In this way, even Astropaths that are not strong enough to achieve a communication alone can prove useful if gathered together[5]; it is, however, known that weaker Astropaths participating a Choir are exposed to a higher risk of Warp perils.[2h] Astropathic Choirs are commonly found in Astropathic Relays, a kind of techno-arcane installation placed on major vessels or stars: they are facilities conceived to aid and boost Astropaths' powers. Relays are usually equipped with improved detection devices (i.e. Dispersal Scoops) and Warp protection devices (i.e. Hexagrammatic Wardings).[2h]

The Imperium stands as a coherent entity thanks to Astropath networks[1a]; their availability is thus vital for any activity that requires communication and coordination - be it an administrative issue or a military one.[2a] So, the Imperium has a great demand for Astropaths[2b] and they can be found nearly everywhere. Being the most important ones, they account for the vast majority (over 90%) of psykers who serve the Imperium.[1a]

Those rare individuals who climb the ranks of the Adeptus Astra Telepathica are placed in charge of Astropathic facilities and choirs. Some are even made itinerant emissaries, officials of their Adeptus or servants of the Inquisition, Imperial Guard or Imperial Navy.[2b] Astropaths are also prized by Rogue Traders, since they are capable not only of sending messages at great distances, but also getting in touch with Xenos; serving Rogue Traders, Astropaths' responsibilities are even higher, because they are often no more than a handful in a fleet - possibly one for each vessel.[2b]

An Astropath's uniform is a hooded robe or habit and a waist-belt.[1c] They keep their personal belongings in a sling bag, often decorated with religious ornaments and motifs.[1c] Green (or any variation of it) is the colour that symbolises the appartenance to the Astropath status.[1c] Despite this, other colours have been known, such as the orange-red robes of Alen the Seer.[12]

As a result of the Soul Binding ritual, Astropaths are, as a rule, blind.[1c] Their blindness can affect their eyes in different ways, from disturbing whitened globes to scarred empty eye sockets.[2a][9] Some Astropaths without eyes use dark plasflex hemispheres to cover their empty eye sockets.[9][13]

Even if they endure Warp risks thanks to the Soul Binding ritual, Astropaths are often taken to madness since they are over-exposed to gruesome visions and haunted by eerie presages about the future, so they appear as tormented wretches on the verge of doom.[3a]