I am your evils returned to you. I am the justice your victims cry out for. The protector of the weak. The light in the darkness. The Hand of Asuryan. I am the avenger. 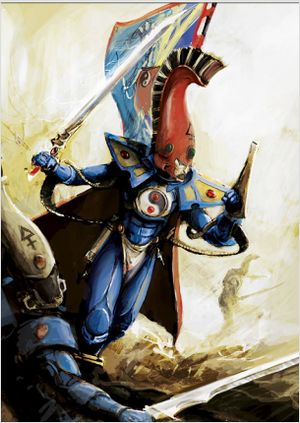 Asurmen is said to have been the first Eldar Phoenix Lord. He was the founder of the Path of the Warrior and he created the first shrine of Asur, the Dire Avenger shrine, which was to grow into the most wide-spread of the Aspects. Asurmen's name means "The Hand of Asuryan" and it was he who led the Eldar race away from their doomed homeworlds at the time of the Fall of the Eldar.

Born Iliathin, the Eldar who would become Asurmen was born on the world of Eidafaeron and lived an uneventful and boring life there. Before the Fall of the Eldar, he was skeptical of the prophecies of doom being spread by those who would become the Exodites. Iliathin's brother Tethesis wanted to join the Exodites but his skeptical sibling refuses to take part. Once the Doom of the Eldar came, Ilaithin and his brother both somehow survived the calamity and waged a desperate struggle for survival amid the ruins of their world, now overrun with Daemons. When Tethesis was possessed by a Daemon, Iliathin was forced to kill him. Afterwards, he managed to find shelter at an old temple which Daemons do not venture near due to the lingering presence of the Eldar Gods.[5]

Contemplating suicide, Iliathin lived alone in the temple for several years but was saved by an Eldar feral child Faraethil. Though initially shunning the girl, later when Faraethil was assaulted by Dark Eldar, Iliathin renamed himself Asurmen after the god Asuryan and saved her. Asurmen agreed to take the girl as his disciple and they left the planet, eventually gathering more like-minded followers.[5]

Asurmen and his followers landed on a barren world and renamed it Asur. There, he founded the first of the Aspect shrines, the Dire Avengers, which have become the most common of all the warrior Aspects.[1a] Asurmen established the Asurya, who went on to open new Aspect Shrines across the stars.[2] 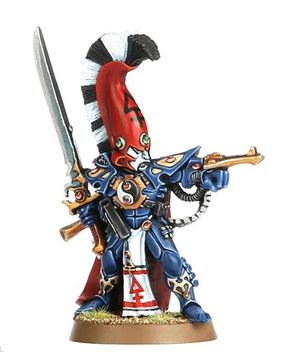 He has traveled to more craftworlds than any other Phoenix Lord, teaching those Eldar who wanted to learn, and has founded more shrines than any other Phoenix Lord. The greatest of his students went on to found their own Aspect shrines and became Phoenix Lords themselves.[1a] Soon after the inception of the Aspect Shrines, the Hand of Asuryan vanished, but tales of his deeds continue to be reported. Experiencing various deaths but being reborn again thanks to his armor, notably at the hands of the Keeper of Secrets N'Kari[3], he has been rumored slaying the agents of Chaos in the Eye of Terror to the Eastern Fringe. His actions have even become legends to the lesser races.[2]

Asurmen later appeared under the command of Jain Zar, now pledged to Ynnead. Asurmen took part in the battle to defend the Ynnari against the Thousand Sons and Tzeentch Daemons in the Webway, vanishing during the struggle.[6]

Asurmen's ancient armour incorporates vambraces with integrated Shuriken Catapults known as the Bloody Twins and his Diresword (named The Sword of Asur[4]) was the first created and contained the spirit of his brother, Tethesis, who was slain by a Daemon.[1a]