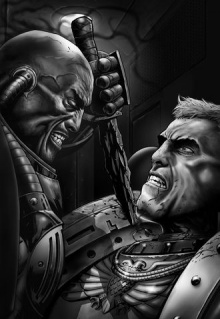 During the Battle of Calth, the Word Bearers and several of their cultist soldiers carried small daggers of flint or crude metal, known as athames. They were a mark of status or membership among both, and seemed to have special properties that could manipulate the fabric of reality.

First Chaplain Erebus forged eight athames from the anathame weapon that he had stolen from the Interex, and which later turned Horus to the worship of Chaos. He kept one for himself and gifted the others to the commanders of the Word Bearers Host on Calth; Kor Phaeron, Morpal Cxir, Foedrall Fell, Hol Beloth, Quor Vondar, and Phael Rabor, and the last one for his own bodyguard commander, Kolos Undil.[4]

When passing these out, Erebus warned the assembled commanders that these were no "ordinary" athames, indicating that the athame was a name used by the Word Bearers even before Erebus acquired the anathame.[4]

Criol Fowst, a human leader of the Brotherhood of the Knife, possessed an athame gifted to him by his Legionary patron, Arune Xen. Fowst used his athame to sacrifice victims as part of the Word Bearers' summoning ritual.[1a] He considered it his most treasured possession, and was enraged when he lost it to Oll Persson.[1b] Persson later used this athame to cut a rift in realspace that allowed him and a small group of survivors to escape the poisoning of Calth's atmosphere.[1g]

Ultramarines Captain Remus Ventanus was able to kill the daemon Samus with an athame confiscated from Morpal Cxir. He used the knife because he had no other weapon to hand, but was amazed by its potency in killing the daemon. His Sergeant, Kiuz Selaton, suggested gathering the other fallen daggers and using them against the hordes of daemons rampaging across Calth. Ventanus considered using them might have a corrupting influence and refused, but kept the one he had used on Samus in his belt.[1d]

Kor Phaeron and his elite guard carried athames during their boarding action of the Ultramarines' orbital weapons platform. When Roboute Guilliman and a small force of Ultramarines boarded the platform, Phaeron was able to stun Guilliman with his sorcerous powers. While the Ultramarines' Primarch was temporarily helpless, Phaeron became intoxicated with the idea of using his athame to turn him to Chaos, just as Erebus had turned Horus. He pierced the flesh of Guilliman's throat with it, but didn't strike a fatal blow. That was his mistake: resistant to whatever dark influence was carried by the knife, Guilliman counter-attacked, driving Phaeron back and forcing the Word Bearers to retreat.[1e][1f]

Kor Phaeron used his athame to great effect in the subsequent Battle of the Macragge's Honour, cutting a "hole" in realspace that allowed the battleship Infidus Imperator to make an instant translation into the warp, without the need for the normal calculations. Later, when the Macragge's Honour devastated the Infidus Imperator with an overwhelming volley, Phaeron cut another hole that allowed him and a small entourage to escape the bridge of his doomed ship, to reappear on Sicarus.[2]

The Shard of Erebus

"Shard of Erebus" redirects here. For the short story, see The Shards of Erebus (Short Story).

Ten thousand years later, during the Invasion of Ultramar, Marneus Calgar, the Chapter Master of the Ultramarines, killed the Daemon Prince M'kar with the athame that Uriel Ventris had retrieved from Captain Ventanus' tomb. The Daemon recognized the knife as the Shard of Erebus.[3] This knife was likely the same athame that Ventanus had taken from Hol Beloth, though it could also have been the knife Ventanus had taken from Morpal Cxir and used to banish Samus.

In M41, an operative of the Ordo Malleus stole an athame from a museum on a Tau Sept World; the Tau had mistaken it for a crude flint knife, proof of how little the gue'la had evolved over their long history, and had no idea of its special properties. When trapped by a team of Fire Warriors, the operative used the knife to "cut a hole in reality" and escape.[6]