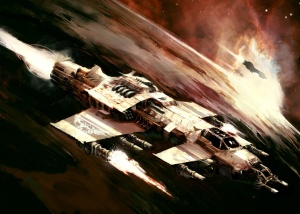 Attack Craft are the small, carrier-launched spacecraft that provide far-ranging support for battlefleets in combat. The difficulty of hitting such targets with anti-ship weapons makes them a formidable weapon, but they are held back by their lack of endurance.

Most attack craft fall into one of three broad categories: Fighters, Bombers, and Assault Boats.

The Tyranids use a number of organisms that approximate the function of fighters and assault boats, but they are far too varied to be categorized into distinct classes as such.[4]