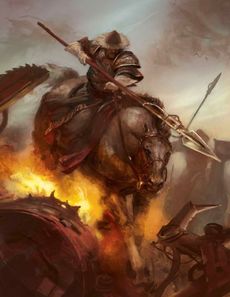 The Attilans are among the most renowned Rough Riders of the Imperial Guard.[1]

Attila itself is a savage and barely civilized world, its most primitive inhabitants existing as nomadic horsemen divided into clans. These fierce clans supply many recruits to the Imperial Guard, forming elite specialist units of cavalry scouts for the armies of the Imperium. The most important component of Attilan culture is the horse. The horses of Attilla are malicious, compact and resistant animals, from which their riders in emergency situations can draw off small quantities of blood to enable themselves to operate behind enemy lines for long periods.[1]

Each clansman proudly carries long scars on his cheeks, which he gets from his coming-of-age ritual. To create the most impressive scars, ash is commonly rubbed into the fresh wounds. Normally Attilans wear their hair long and open. Attilans are infamous for never bathing or cleaning their clothing. They believe that washing is an insult to the spirits of water. This superstition could not be defeated even by the priests of the Adeptus Ministorum. This peculiar trait has led to the Attilans being the butt of many jokes by their fellow guardsmen. A well-known proverb has it that that the smell of an Attilan is just as powerful a weapon as his war lance.[1]

The Rough Riders largest battle was on the world of Loxar IV, where they led the largest cavalry charge in the Imperium's history to defeat Necron forces.[2]