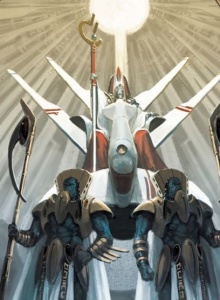 "Our Conquest is inevitable, our ascension a matter of time. Let none who are wise deny our destiny."[2b]

Aun'Va is the most recent known Tau Ethereal Supreme, the Aun'o of the Tau Empire and Master of the Undying Spirit. His full name was Aun'o'T'au'Acaya'Va'Denta and his title included Master of the Undying Spirit and stood as supreme Ethereal in the new Spheres of Expansion with Commander Shadowsun at his side at all times. He led them forward to new frontiers and enemies.[1a]