The Aurora Chapter is a Chapter of Space Marines formed from the Ultramarines Legion during the Second Founding. Like all descendants of the Ultramarines, they are strict followers of the Codex Astartes.[1]

During the Great Crusade and Horus Heresy, the 4th Chapter of the Ultramarines Legion was known as the Aurorans. They possessed five times as many armored vehicles as a standard chapter.[13]

The Aurora Chapter operates largely in the Ultima Segmentum and are known for their armored assaults, and as such possesses three times the typical number of Land Raiders and Predators[2a]; all of which are manufacutred on their Homeworld Firestorm[10]. After defeating the Alpha Legion in the Redemption Rebellion alongside the Knights of the Raven in 744.M41, the Aurora Chapter blamed the Knights for their heavy losses and have been in a bitter feud with them since.[6]

The Chapter's Chaplains wear Rosarii gifted to them by the Ecclesiarchy.[7]

Noted Elements of the Chapter 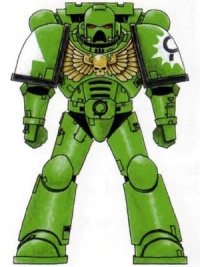