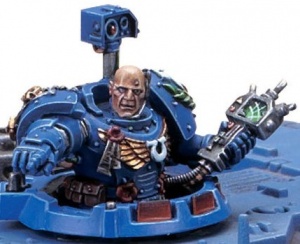 Scanners (or multi-scanners, or Auspexes) are Imperial short-ranged devices used to detect motion, invisible gases and energy emissions throughout a wide spectrum, such as heat, radiation and most forms of energy given off by vehicles and living troops.[1]

Their main tactical use is to reveal otherwise hidden troops and allow them to be fired on. The standard range of a scanner is fifty metres, although walls more than fifty metres thick as well as certain shielding materials are able to block them.[1a]

Scanners can take the form of separate hand-held devices, or they may be built into a helmet such as in the case of Terminator armour. The Imperial Guard uses scanners known as surveyors. Space Marines and other forces use the auspex.[Needs Citation]

This energy scanning device has the effect of alerting the user to the concealed presence or imminent arrival of enemy troops in the vicinity.[4b]

This type of scanner detects energy emissions indicating the position of vehicles, robots, functioning equipment, weapons, etc. It would not detect ordinary life functions, but psychic activity will detected as an extremely hard reading. However radiation sources will not show up as distinct from other energy emissions.[1b]