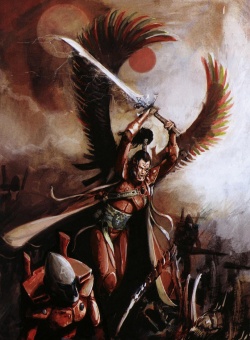 An Autarch is the supreme commander of an Eldar war host, having an exceptional understanding of the art of war and also the many Eldar Paths.[1a] They have since followed the Path of the Leader.[9]

They are held with high esteem by both Seers and warriors alike with each Autarch having mastered many paths across their centuries-long lifespans. This includes one or more facets of the Warrior Paths and at some point in their lives, they begin to show a passion for the intricacies of command as well as strategy. They do not believe in victory being achieved by simple martial excellence in the heat of the battlefield but that the true path lies in holding a wider vision whilst directing a war host in achieving the most lethal as well as efficient manner. Thus, they walk the Path of Command that leads to a burning obsession where they see each mission and battle being part of a much grander battle plan. Inspiration and guidance comes to them from the mythical leaders of the ancient Houses such as Eldanesh, Ulthanash and Bierellian.[1a]

The insight of an Autarch provides them with unparalleled strategic capability as they know of each speciality of the Eldar way of war to such an extent that even an Exarch cannot match them. This is because an Exarch is obsessed with only one facet of a conflict and thus forever bound to it, which prevents them from ever hoping to achieve the heights of an Autarch. Under their guidance, an Eldar war host can turn out to be a well-honed machine where each component works in perfect synchronicity with its other parts. Though serving as generals, Autarchs are not relegated to simple command and when the bloodlust calls to them, they are quite capable of entering into the battlefield in order to spearhead assaults, duel with enemy leaders or destroy the war machines of their foes with contemptuous ease. In such times, winged Autarchs soar at the head of their forces where they swoop down into the battlefield in order to change the course of the battle with a well-placed strike.[1a]

This makes them different from Seers who act as a Craftworld's guides and counsellors; Autarchs are looked to during the times when the Eldar seek powerful leaders as well as masters. They are sought when the Seers deem the Eldar's fate being led to war and Autarchs are called upon for to their wartime leadership. Their skill, cunning and experience are unrivalled and they lead their fellows into battle where they impart to them every lesson of war. They are great leaders on the field of battle, which is the only place where they lead the Eldar as they have nothing but fire coursing through their veins.

This means that Autarchs do not permanently retain their rank; when the time for war has passed, they return to their traditional rank of Exarch, and their traditional place as leaders of their Aspect shrines. Autarchs only ever assume power when they believe their path calls them towards war. It is only through sheer exertion of their will that they assume the Autarchy and gather warriors about them to follow this path. Among most Eldar, the Autarchy is considered a horrifying and dangerous concept as any of their kind can be entirely consumed by it. Thus, at best, an Autarch is guided by the Seers and at worst, they are guided only by the Path of War.[3a]

An Autarch on the Eldar Jetbike is called Autarch Skyrunner.[12]

Due to their mastery of several Aspects, Autarchs can have access to a wide variety of wargear. These include:[12]

The Autarch Kayleth is a playable hero in the Eldar campaign of Warhammer 40,000: Dawn of War II - Retribution. They are also summonable secondary commanders in the game's multiplayer and skirmish modes -- initially armed with Swooping Hawk wings, a shuriken pistol and power sword, which can be replaced for an Executioner or a Fusion Gun.[2]