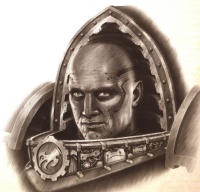 Autek Mor was an Iron Hands Iron Father and Lord of the Morragul Clan during the Horus Heresy, and later became the first Chapter Master of the Red Talons.

Mor had a sinister reputation within his own Legion, and dark rumours maintained that the origins of his gene-seed were not as they should be. A Terran by birth, he was one of the Iron Hands' first recruits and already a veteran before the rediscovery of Ferrus Manus, taking part in the reconquest of the Sol System. By the time his Primarch was reunited with the X Legion, he had already developed a reputation as both a weaponsmith and malevolent soul, having killed several of his own Legion in duels over slights to his honour and ruling his Clan Company with an iron fist.[1]

On Medusa he took over the outlaw Ra'Guln Clan's Leviathan crawler in a bloody night of violence and made himself its lord, imprinting on it his name and will. In the years to follow, his Morragul Clan became a sinkhole for the outcasts and most unstable elements of the Legion. Mor and Ferrus Manus had no love for one another, but when his Grand Cruiser Red Talon arrived in the Isstvan V System, Mor nonetheless fought valiantly in a vain attempt to break though the traitor lines and extricate his Primarch. Mor's ship took heavy damage in the space battle and he fled the system, dogged by traitor pursuers.[1]

Mor remained an active resistance fighter for the Loyalist cause following Isstvan. He rejected Shadrak Meduson's strategy of waging guerilla war against the traitors as an unworthy plan; instead, Mor would hurl his own forces directly at traitor-occupied worlds. Commanding a rag-tag Iron Hands strike force aboard the Red Talon, Mor orchestrated a brutal campaign that targeted traitor recruitment and resource-producing centres. Notable examples of Mor's genocidal strategy included the nuclear destruction of Gethsamaine Colonus' cities, the razing of the World Eaters' primary mustering world of Bodt in 008.M31 and the orbital scouring of the mining world Saria Major. To Mor, there were no innocent civilians in this conflict, only Loyalists prepared to die for the Emperor or those who aided the traitors' cause in any fashion.[2]

Following the Horus Heresy, Autek Mor became the first Chapter Master of the Red Talons, formed during the Second Founding from some of the most aggressive and volatile members of the Iron Hands.[Needs Citation]