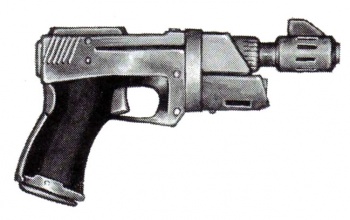 Autopistol is the general name for any rapid-firing handgun which shoots bursts of caseless ammunition.

These rapid-firing firearms have a faster rate of fire than most other pistols. They are similar to M2-era machine pistols or compact submachine guns. Essentially they are the pistol version of the Autogun. The weapon works by using a solid hammer to ignite a chemically combustible propellant, expelling the solid projectile through the barrel. The reactive force of the bullet's expulsion returns the breech, loads a further bullet, re-cocks the mechanism and (providing the trigger is still depressed) fires a further round until the magazine is empty or the trigger is released. Autopistols are lightweight, but lack accuracy beyond the closest of ranges due to their low velocity when compared to larger weapons. They have a high rate of fire, but only use a small calibre round. The weapon is poor at penetrating armour, but its high rate of fire makes it useful against lightly armoured opponents, putting them down in a single burst of shells.[1][2][3][5]Most autopistols are believed to fall within the following characteristics:[6]

Autopistols are still in massive use throughout the Imperium and can be found even on low-tech worlds. Like the larger Autogun it is a very easy to construct and usually available in large numbers. The autopistol is a common weapon amongst renegades, gang members, and lowly criminals, being as easy to use as it is to construct. They are not generally considered a military issue weapon, but are a favourite amongst many military veterans as a supplement for their standard lasgun or as a backup weapon, especially by the ones using unreliable melta- or plasma-weaponry. Some regiments, including the Cadian 8th, often equip all their troops with autopistols as sidearms, improving their combat firepower. Other commanders allow their troops to acquire spoils from the battlefield for their own use and autopistols are popular choices.[6] In other quarters, it is felt that only officers should be equipped with pistol weaponry, so such equipment is reserved for soldiers of and above the rank of Lieutenant.[1][2][3][5]

Produced on the Segmentum Fortress of Cypra Mundi, these are standard with Imperial Navy officers in the region. They are shorter in range than a standard Autopistol but use fragmenting ammunition that's highly effective against human targets.[18]

Cancellor of the Darkand planet was armed by this pattern.[17]

A copy of another famed design manufactured by the Orthlack of Gunmetal and often regarded with some justification as a “prince among pistols”, Hecuter is tooled and balanced to exact tolerances, making it quite controllable despite its large calibre for an autopistol. Its clip projects somewhat from the angled grip, giving the weapon a distinctive profile, while despite its size, its excellent design makes it an “easy carry” from shoulder rigs and quick-draw holsters.[14]

Crafted by the gunsmiths of Gunmetal city in Scintilla to be as sturdy as possible, Ius is a solid and unspectacular yet utterly reliable weapon. Normally used by Calixian Arbites as a backup firearm, it is ubiquitous amongst both the Calixian Arbites and planetary enforcers of Scintilla. Typically issued to junior ranks within both organisations, Ius is designed to be foolproof and to withstand punishment that would damage other firearms.[13]

This elegant and perfectly balanced stub revolver is deceptively simple in design and exquisitely well-made from the finest materials. Its lack of clip capacity and slightly ungainly size make it a poor choice for real combat in the eyes of some, but The Fate Bringer is perfectly suited to the role of a duelling piece and also makes for a good target and assassination pistol.[14]

A sophisticated autopistol no larger than the average compact stub gun the Encarmine packs a lot of firepower into a relatively small frame, sacrificing stopping power for a reduction in size and increase in clip capacity. Unfortunately the weapon lacks the kick to deal with heavy armour, limiting its use. It is widely carried for personal defence and as a sidearm by “second liners”, such as plainclothes enforcers, hauler rig crews and merchants’ factors.[14]

An autopistol issued to the Enforcers of Hive World Alecto.[25]

The weapon on the picture has been heavily modified for night- and tunnel-fighting. Removing the original flash suppressor, it has had a home-made silencer fitted. It also has had a wrist loop added and has been blackened for camouflage. All other changes, including its counter-weight are due to it being the older Mk 10 version.[1] 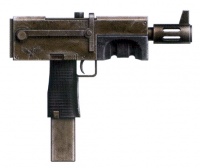 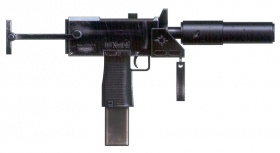 This model is originated from Voss Prime and features a folding skeletal stock, which is not often used as the increase in accuracy for aimed fire is not generally required and its only sight is a small iron one. This model has a flash suppressor and a moulded fore-grip.[1]

Disposable handgun is essentially an extremely stripped down Autopistol with a small clip. Made by a wide variety of manufacturers, disposable handguns are one of the most easily obtainable and inexpensive firearms in the Galaxy. Many shipboard survival kits contain one of these weapons. They have very shoddy craftsmanship and poor performance and seasoned warriors joke that when the clip runs out, someone is better off throwing the gun at an opponent than trying to reload. However, many of the destitute cannot afford a better weapon and it is useful for protection.[4]

This modified Autopistol fires specially designed armour-piercing metal shards containing a vicious cocktail of venomous chemicals with deadly accuracy. The initial wounds caused by the shards allow the venom to enter the victim's bloodstream and cause death, and thus the weapon can bring down the largest opponents in a single shot. It is designed so that if the vicious impact of the bullet doesn’t kill the target, the poisons flooding into its bloodstream will. Often, they are the final word in terminal close encounters. Ripper Pistol is favoured by those who venture into hostile jungle planets and Death Worlds.[4][8]

Naval pistols are heavy, large-calibre autopistols characterized by their robust construction, which allows them to deliver solid blows in melee combat, should it prove necessary. Naval pistols use special fragmenting ammunition designed to inflict minimal damage to ship systems while having a devastating effect on unarmoured flesh. Naval pistols are only issued to crewmen of the Imperial Navy, and are never issued to the Imperial Guard. Nevertheless, Guardsmen often take naval pistols as mementos of a particular journey—when they can get away with it.[16]