Avatars, (Eldar: Athairs) are the Troupe Masters: the leaders of Harlequin Troupes.

Troupe Masters are closer to the lead players of a cast than formal commanders; they are elevated by will of their comrades, playing their role until it is time for another to take their place.[1]

This status will be marked out by their wardrobe and equipment choice, as well as the possession of a number of small batons which unfold into a flag representing the Harlequin masque the troupe belongs to (if any). This flag is generally left behind after an action, as a 'calling-card'. On the stage, Avatars play the part of Eldar Gods.[1]

They are the leader of a Masque and will take on the role of the Laughing God when the Masque performs as one company, with Avatars playing the roles of the other Eldar Gods.[1]

Their costume choice is notable, with face-masks that either display daemonic or angelic visages, or that of the Laughing God himself.[4]

They act as exemplars for all their Troupe's key characteristics, embodying everything it means to be Light, Dark, or Twilight writ large. 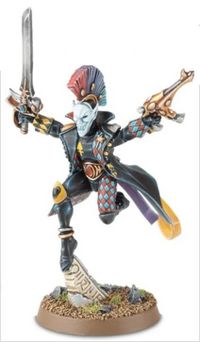 Troupe Masters often adopt the title of Great Harlequin[1]. They thus embrace the role of the High Avatar (Eldar: Ardathair) of Cegorach – or some aspect of his personality.[5] It is said that the Great Harlequins are the guardians of the Webway routes leading to the fabled Black Library.[6]

In the Codex: Eldar (2nd Edition), Avatars from the Rogue Trader era no longer exists as a bespoken unit. There are Harlequin units, and a Great Harlequin can be included to a maximum of 1 per Harlequins unit (Codex: Eldar (2nd Edition) pg. 26, pg. 69, pg. 80). Great Harlequins as a 40k Unit were repurposed into Troupe Master when the 4th Edition Troupe Kit was released, and Great Harlequin became a title referring to a Troupe Master playing the role of Cegorach, which fills an identical role to that of the High Avatar from the first edition of 40k.