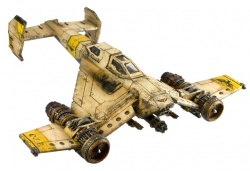 The Avengers main role is conducting high-speed, low-level attacks on ground targets. It exceeds most other Imperial aircraft of its size in firepower, and it is particularly effective against armoured targets due to the Avenger bolt cannon and twin Lascannons it carries.[1]

Its main targets are armoured vehicle formations and high-value strategic assets such as munitions or fuel dumps. The Avenger is an ancient design, believed to originate from Holy Terra during the Age of Strife. It was adopted by forces supporting Sebastian Thor during the bloody wars of faith and schism known as the Age of Apostasy.[1]

It is a very effective design and is now a staple of any Imperial Navy air support mission. Due to its reputation of holiness, the Avenger is often specifically requested by the Adepta Sororitas should they require close support in their purgations.[1]

An STC for the Inferno pattern Avenger was found by Deathwing terminators on the Space Hulk Olethros. This variant is "strictly reserved to Blood Angels support". [2] 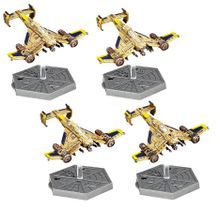