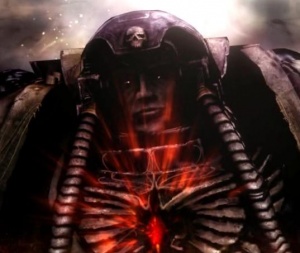 Azariah Kyras was the leader — Chapter Master and Chief Librarian both – of the Blood Ravens.

Relatively little is known of the leader of the Blood Ravens. What is known is that 1,000 years before the Black Legion's invasion of Subsector Aurelia, planet Aurelia disappeared during a Warp Storm after being pushed sufficiently out of orbit for the planet to be covered with glaciers and almost the whole population killed. Just before the planet was taken by the Warp, Epistolary Kyras managed to imprison a wounded Great Unclean One of Nurgle by the name of Ulkair, after his master Moriah was killed fighting it. Soon after, the Warp took the planet, and Azariah Kyras with it.[1]

Assumed dead, Kyras was posthumously awarded honours for bravery. Kyras returned five centuries later[4], appearing inexplicably before the battered elements of the Blood Ravens 5th Company aboard a space hulk called the Judgment of Carrion. Kyras aided Apothecary Galan, the leader of the expedition, in fighting the daemons and Tyranids infesting the hulk. Though the Space Marines had found a lost Battle-Brother, they were still marooned, unable to escape. Their "exits sealed, and beacons failed," Galan and his Marines were given to despair. Galan was haunted by a daemonic presence, which was given name when Kyras regaled the other survivors with his tale of losses endured by their Chapter in imprisoning Ulkair. The daemon reached out from his imprisonment within the Warp-swallowed world of Aurelia, tormenting the Blood Ravens and hungering for their gene-seed. Kyras did nothing to hinder the defeatist mood, and spread the taint of Chaos into his brothers instead. Eventually Kyras made a pact with Ulkair for their release from the Judgment of Carrion, which required that Galan be possessed by a daemon of the Warp.[1]

Both Galan and Kyras escaped the Judgment of Carrion, and Kyras' return was hailed as a blessing by elements of the Blood Ravens, but not by the Captain of the 3rd Company, Gabriel Angelos who viewed the return of Kyras as an ill omen. Sometime thereafter, Kyras rose to the ranks of both Chief Librarian and Chapter Master. Galan was stationed as an Apothecary within the Honour Guard.[1] Angelos subtly investigated Kyras' actions.[4]

The Black Legion's invasion into subsector Aurelia finally revealed Kyras' corruption. The Blood Ravens attached to the 4th Company boarded the Judgment of Carrion and discovered evidence left behind by Galan and Kyras, suggesting chaotic influence and revealing the pact with Ulkair.[1]

Kyras himself was not present in the subsector during the invasion, instead having sent Captain Apollo Diomedes of the Honour Guard to represent his authority and order a withdrawal from any contact with the Black Legion. However, according to Galan's confession as he lay mortally wounded by the Force Commander, Diomedes himself was not corrupted; only some of the men under his command had been tainted.[1]

Gabriel Angelos and Aramus disobeyed the Chapter Master's order to withdraw and stayed to defeat the stirring Ulkair on Aurelia. The ending of the game states that the "renegade" Blood Ravens plan to depose Kyras, creating a prologue for a Chapter-wide civil war.[1] Kyras declared Angelos and his follows traitors and ordered the Marines loyal to him to hunt them down.[4]

Ten years after the Second Aurelian Crusade, the subsector remained in turmoil as remnants of the Black Legion, Orks and Tyranids continued to cause further chaos on the Imperial worlds. The civil war amongst the Chapter also continued, which combined with the chaos, forced the Inquisition to declare Exterminatus on the entire subsector. In order to prevent this, Captain Diomedes investigated the allegations made by Captain Angelos, resolved to either prove Kyras' corruption, or to redeem him.[Needs Citation]

The resulting investigation proved that Kyras had fully committed himself to Chaos, orchestrating the events in Subsector Aurelia to force the Exterminatus. Diomedes confirmed that, while the whispers of the Great Unclean One Ulkair started Kyras on the path to Chaos, it was ultimately the daemon of Khorne released from the Maledictum by Gabriel Angelos on Tartarus[3] that fully convinced Kyras to forsake the Emperor. Kyras eventually extended this offer to Diomedes, but was rejected.[Needs Citation]

With the Exterminatus under way, Kyras went to Cyrene, a former Blood Raven recruiting world that had been subject to Exterminatus years before. There Kyras' ascension to Daemon Prince was interrupted by Blood Ravens forces under Angelos. Though Kyras severely wounded Angelos in the course of ensuing battle, he was ultimately defeated and killed.[Needs Citation]

Angelos succeeded Kyras as Chapter Master[2] after a bloody purge of the tainted elements of the Chapter.[4]