"Forget your past life. From this day on you are simply a Dark Angel - nothing else is of consequence. The Chapter is all that matters"[4] 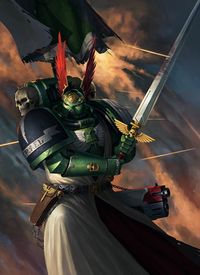 Azrael is the Supreme Grand Master of the Dark Angels Chapter and is one of the most secretive of the members of the already very secretive chapter.

He was recruited from the savages of the feral world Kimmeria but shows none of their uncultivated behaviors. He is best known for, other than his leadership of the Dark Angels, caring for the chapter banner, the scouring of Truan IX, and crushing a techno-revivalist cult during the Faze V Uprising. For decades he then disappeared but must have provided suitable services to the chapter for he later became a member of the Deathwing, Captain of the 3rd Company and then Master of the Deathwing in 917.M41. From there, he famously led the assault that slew the Daemonically possessed Governor of Sephlagm before subjecting the world to Exterminatus. He gained further fame during the Vendetta Campaign.[1] A charismatic and dynamic leader, he was an inspiration to those who fought along side him.[Needs Citation]

When the previous grand master, Naberius, died in 939.M41[1] in the Rhamiel Betrayal, Azrael fought alongside Ezekiel to cover his body and together defeated his killer, the Night Lords Daemon Prince Gendor Skraivok.[4] After the battle Azrael was quickly promoted and given the title Keeper of the Truth and now sits at the head of the Inner Circle. He not only leads the Dark Angels in battle but also orchestrates the hunt for the Fallen and guards the chapter's most precious and terrible secrets, many of which are known only to him and the previous chapter masters before him.[Needs Citation]

Towards the end of the 41st Millennium, Cypher turned himself in to Azrael and not only informed him that The Rock held the time-altering Tuchulcha engine, but that both Astelan and Typhus were seeking similar devices. After the intervention of the Watchers in the Dark Azrael agrees to work with Cypher and they eventually gather all 3 engines, creating a warp rift over Caliban. However as Fallen attempt to enter the portal and potentially change history and pleading from Ezekiel to let history be, Azrael reluctantly orders Tuchulcha to scatter everyone from the rift. However Azrael was not specific at which moment in time he meant, and the Fallen on Caliban ten thousand years previous were scattered as well. This leads to the dark reality that Azrael himself may have been indirectly responsible for the scattering of the Fallen by causal loop.[2]

In the aftermath of the disastrious Massacre at Darkmor Azrael organized a summit of all Unforgiven Chapters Supreme Grand Master's at The Rock. During the summit, Roboute Guilliman and his new Indomitus Crusade docks at The Rock and delivers much-needed Primaris Space Marine reinforcements. Relieved that Guilliman apparently did not know or at least did not care about the truth of The Fallen, Azrael pledged his forces to the new Indomitus Crusade.[5]

In the Era Indomitus the Dark Angels have accepted the new Primaris Space Marines out of necessity, but the Inner Circle remains skeptical of their presence but they have not gone through the strict rituals and tests of loyalty present to the rest of the Chapter. The Inner Circle began to debate over their worthiness to join their ranks. At the height of the debate Azrael staked his entire career on the Primaris Space Marine Apharan of the Deathwing, stating he was confident the Marine would pass a series of trials. Azrael personally oversaw Alpharan's trials, and in the aftermath there could be no doubt of the Primaris' worthiness to join the ranks of the Inner Circle.[6]

Upon becoming Keeper of the Truth, he obtained the traditional wargear of his predecessors; the master crafted Sword of Secrets, an ornate suit of Power Armour known as The Protector, The Lion's Wrath combi-plasma gun, and the ornate Lion Helm. The Helm is carried by a being of unknown origin (possibly a Watcher in the Dark), but it shows extreme devotion to its master.[Needs Citation]

Azrael is named after the Archangel of Death of the same name in Hebrew and a few select pieces of Islamic lore. From an adapted form of Hebrew it means "Whom God Helps".