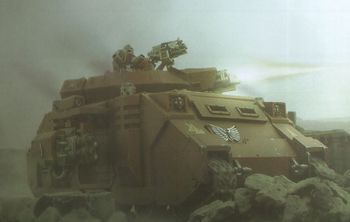 The Baal Predator is an infantry support tank used only by the Blood Angels Space Marine Chapter and their Successor Chapters.[1a]

The Baal-variant of the Predator was developed by the Blood Angels' Techmarines, designed to carry weapons with a high rate of fire, giving it devastating anti-infantry power and enabling it to lay down a withering hail of fire as the Blood Angels advance, scything down enemy infantry and light vehicles with terrifying efficiency. Due to its specific weapon, Baal Predators are highly effective in close support of infantry assaults but have small effectiveness as an anti-tank weapon.[1a]

Like the other Predator variants, the Baal is based on the ubiquitous Rhino chassis. The pattern has seen service with the Blood Angels almost since their inception as a Legion. The STC template for the Baal's construction was recovered during the early parts of the Great Crusade on Atium III, from the ruins of the arch-techno-heretic Lord de Ladt. Instead of giving the template to the Adeptus Mechanicus, the Blood Angels kept it and placed it within a stasis-cell on Baal where it remains to this day, protected as a relic of the Chapter. This has served as a source of friction between the Blood Angels, who continue to deny any wrongdoing, and the Adeptus Mechanicus, which claims that this variant and its STC template were never officially sanctified. Because of this, the design is now only produced by the Blood Angels themselves and by their descendant chapters.[1a]

Because of the Blood Angel's refusal to share its construction methods with others, the Baal's degree of similarity with other Predator tanks in its inner workings can only be speculated.[1a] The main observable differences are the weapons which the Baal Predator carries. The main turret mounts either a set of twin-linked assault cannons or a Flamestorm Cannon. The Flamestorm Baal Predators have been included in Blood Angels forces just recently[2] though some of the Adeptus Mechanicus tech-priests have linked it to the Predator variants of old.[3]

Its side sponsons are capable of mounting heavy bolters or heavy flamers. This makes the Baal pattern highly effective at supporting close infantry assaults, part of the preferred method of combat practiced by the Blood Angels.[1a] 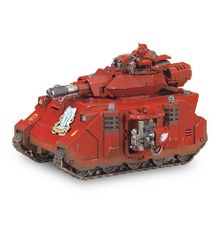 The Lucifer Pattern Thermic Combustor Engine is an unique piece of technology presumably discovered by the Blood Angels along with the Baal Predator STC. This engine is a significantly more efficient machine and vehicle capable of higher speeds than the others of the same class. The Lucifer pattern Engine have its own disadvantages however: unlike the standard Predator engine it can't utilize a wide range of commonly available fuel sources, put an additional stress upon the hull and necessitate more intensive maintenance as well as regular prayers to aggrieved machine spirits. However the Blood Angels considers these problems as acceptable, because thanks to this engine their Battle-Brothers are able to enter the combat much faster then they might without it.[3]

The Baal Predator can also be equipped with a pintle-mounted Storm Bolter as well as Dozer Blades, Extra Armour, a Hunter-killer Missile, a Searchlight and Smoke Launchers.[1b]