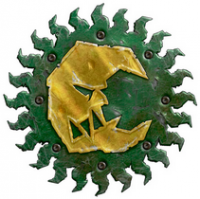 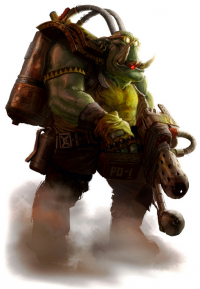 The Bad Moons are an Ork clan

As their teef grow faster than anyone else's, the Bad Moons are the richest of the Ork Clans. This is not considered an unfair advantage, because other Clans figure that they can always bash a Bad Moon Ork over the head and take his teef. As a result, Bad Moons must use part of their wealth to purchase the best gear in order to defend themselves against opportunists seeking to redistribute the wealth; their Warbosses are known to possess Kustom weapons and Battlewagons.[1]

They trade with other Orks to get the biggest guns, the flashiest gear, and the best food (therefore often appearing fatter than the average Ork), but are not as concerned with close combat as other orks, acting as a type of merchant class within larger Ork society. They have been noted to have a greater proportion of Gretchin slaves. The signature mob of the Bad Moons are the Flash Gitz, Orks with devastating Kustom Shootas. Their symbols consist of yellow crescent moons and black flames.[1]