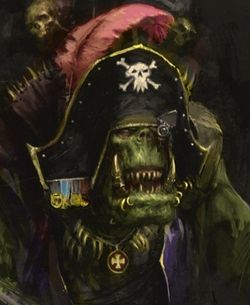 Kaptin Badrukk is the most infamous Ork Freebooter of all. He leads Badrukk's Flash Gitz who have fought with many Warbosses, including every major Warlord in recent times.[2]

Originally of the Bad Moons clan, Badrukk was chased out his tribe for having too many teef. He is an excellent strategist (by Ork standards) and will act as an advisor for any Warlord who can afford his fees.[1]

Since his exile, the Kaptin’s accomplishments have far outstripped those of his fellow Freebooter Warbosses. Fighting alongside the fleet of Warlord Garaghak, Badrukk blunted a tendril of the Tyranid Hive Fleet Kraken with a daring raid on the Norn Queen at its heart. During the War of Dakka, his warriors Bout-shot a Tau Hunter Cadre and some even claim that the Kaptin has personally slain a void-whale. Badrukk’s attacks have become especially daring and spectacular in recent years, making use of tellyporta strikes to drop his Flash Gitz precisely where they need to be. He has gained a significant technological boost after saving the Big Mek Badmek Mogrok on the Knight World of Alaric Prime.[3]

Badrukk's Flash Gitz have become so successful that they have accumulated vast wealth, and there are rumours that they have left great chests of teef buried on wasted worlds and barren asteroids. Much of this wealth can be attributed to Badrukk's exceptional cunning, which he has used to double-cross or intimidate many of his employers out of their rightful share of the loot.[2] He and his crew will usually take the best loot and fly off in Badrukk's Kill Krooza, Da Blacktoof.[1] Despite this, Badrukk and his boyz have a reputation as fearsome fighters and often get hired for the most lucrative and difficult jobs.

All of Badrukk's Flash Gitz are armed and equipped to an incredible degree, due not only to their great wealth but also because of the many gifts presented to them by grateful (or fearful) Warlords. Naturally, Badrukk himself is the most flamboyant of his band - wearing outrageous hats, gold-plated armour with gilt scrolling and equipped with exotic weaponry including his kustomised Ripper Gun, Da Rippa.[2]