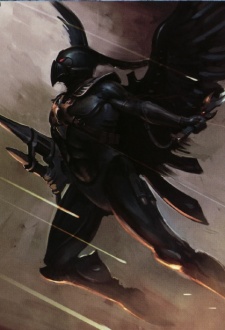 Baharroth, the Cry of the Wind

Baharroth (translated as Cry of the Wind)[2] is an Eldar Phoenix Lord and is said to have been the finest student of Phoenix Lord Asurmen. He was the "winged phoenix" and taught the Swooping Hawk Aspect.[2]

He is also the brother of Maugan Ra, like the sun is to the moon, and many of the Eldar's foes have been killed on the edge of their blades.[3]

The creator of the Aspect Shrine of Swooping Hawks, he fought side by side with Maugan-Ra in their early days after the Fall under the tutelage of Asurmen. Known to move with both elegance and the force of a hurricane, Baharroth epitomizes speed and grace.[2] He participated in many raids into Chaos bases as he is a sworn enemy of Chaos because his family, and much of his Craftworld, Anaen, was destroyed in a massive Chaos assault led by Trarkh (a known Khorne Berserker leader).[Needs Citation]

He has, like all other Phoenix Lords, died and been reincarnated several times, and it is said he will meet his fate at the Rhana Dandra, the final battle against Chaos.[3] He wields The Shining Blade, a weapon forged by the daughters of Vaul in the dying flames of a supernova.[4]

Baharroth later appeared under the command of Jain Zar, now pledged to Ynnead. Baharroth took part in the battle to defend the Ynnari against the Thousand Sons and Tzeentch Daemons in the Webway, vanishing during the struggle.[5]