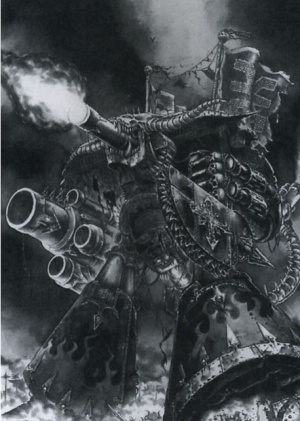 The Banelord Chaos Titan is a huge war machine - the Khornate counterpart to the Imperial Warlord Battle Titan - armored with a carapace of semi-organic shaped armour.

Banelords were among the Traitor Titan Legions which took part in the Horus Heresy against the Imperium. With the defeat of the rebellion, the Titan Legions that followed Horus were driven into the Eye of Terror, which has become their exile and safe haven.[1]

Over the thousands of years spent in the Eye of Terror, the Banelords have been altered to such an extent that it is no longer clear whether the Banelords are corrupted Warlord Titans or creations from the hellish forges of Chaos themselves. The Banelords have taken on the appearance and colors associated with Khorne, the Titans' heads have been reshaped into daemonic visages, and flags, kill banners and pennants fly with the symbols of the Blood God. No one knows whether the Chaos Titans are still piloted by their original crew, their lives made eternal within the Eye of Terror, or by something far worse.[1]

Banelords embody the nature of Khorne, making furious advances against the enemy, and are strengthened by the amount of bloodshed during battle, their destructive power increasing when the tides of battle are in favour of the Khornate army. They are also under the protection of Khorne, which gives them resistance to psychic attacks.[1]

Banelords carry weaponry which is unique to their type. Like the Warlords, they carry immense weapons on each arm - however, they also mount a large assault cannon protruding from their mouths, a heavy weapon on their back carapace (usually an enormous version of the Havoc Missile Launcher more often found on smaller Chaos Vehicles), and a sinuous, prehensile tail tipped with a large battle cannon. Due to the nature of the Blood God, the Banelord is geared towards close combat, mounting a unique weapon known as a Doomfist - a combination of monstrous Chainfist and power fist, additionally mounting a pair of melta cannons for close range firepower.[1] 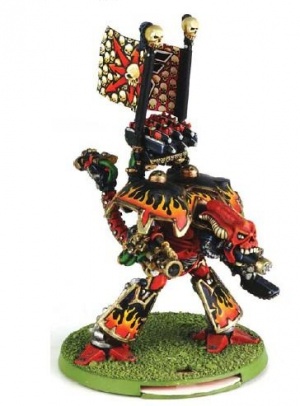