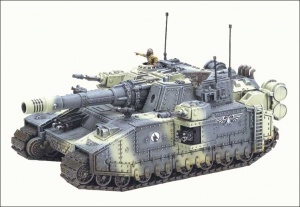 The Banesword is a Super Heavy Tank used by the Imperial Guard for siege battles.[2]

A Banesword is a derivation of the famous Shadowsword, modified to carry a Quake Cannon instead of a Volcano Cannon. The power of the Quake Cannon, combined with the armour of a super-heavy, has established the Banesword as the pinnacle of Imperial siegecraft. Many Imperial commanders would be willing to exchange two regiments for a single Banesword; such is the reputation of this tank. Indeed, Imperial combat doctrine holds an honoured place for the Banesword.[2]

In addition to the Quake Cannon, the Banesword is armed with three twin-linked Heavy Bolters, and two Lascannons. It may be upgraded with a Hunter-killer Missile and pintle-mounted Heavy Stubber or Storm Bolter. It is also equipped with a Searchlight, and Smoke Launchers.[2]

It is traditional to name a Banesword after it proves itself in battle. Newly-commissioned Baneswords are referred to by either their Forge World of origin, or by an abbreviation of their production number. After the Banesword proves itself with its deeds on the battlefield, it will be named, oftentimes including part of its victim's names or titles (although due to the Quake Cannon not normally leaving enough remains left to identify a body, some artistic license is applied).[Needs Citation]