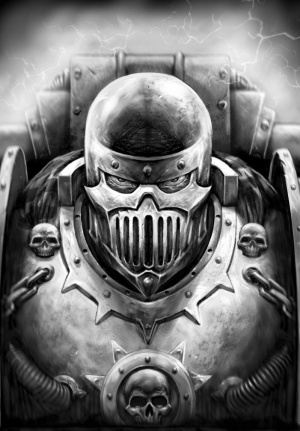 Barabas Dantioch was an Iron Warriors Warsmith assigned to the 51st Expedition Fleet during the Great Crusade. He remained true to the Emperor during the course of the Horus Heresy.

In 999.M30, Dantioch led the Iron Warriors to bring the Gugann system to compliance. A Hrud migration through the system put a halt to that effort. Under orders from Perturabo to take the system at all costs, Dantioch ended up losing most of the legionaries under his command, several ships, and suffered an estimated three thousand years of Hrud entropy-induced aging. The 51st Expeditionary Fleet was effectively destroyed.[4][6]

He subsequently questioned Perturabo's purge of the Hrud in the region, asserting that the purge prompted the migration and inferring that Perturabo, or the Emperor himself, had made an error in committing to the campaign. His name was expunged from records and the Terminator armour intended for his use was reassigned to Barban Falk.[1][3] The last orders Dantioch received from Perturabo were to take the remainders of his command to Lesser Damantyne and bring it to compliance and to never show his face again.[6] In the process of rendering Lesser Damantyne compliant, Dantioch designed and led the construction of the Schadenhold. When Warsmith Idriss Krendl came to the fortress at the onset of the Horus Heresy, ordering that it be used as a resupply point for Horus's armies, Warsmith Dantioch refused to betray the Emperor. Krendl told him that he would crush his fortress in the name of Horus.[1]

Dantioch defended a bloody siege of the Schadenhold, spending the next 366 days commanding his meager forces, who became informally known as the "Sons of Dantioch", against the 51st Expedition Fleet and the 14th Grand Company. Towards the end of the siege an Nurgle-aligned Emperor class Titan was deployed against him, and managed to finally breach the fortress's defenses. With the fortress about to fall to the traitors, Dantioch gathered the surviving members of his garrison, detonated pre-set demolition charges set on structural weakpoints of the entire fortress, and teleported himself and his remaining troops onto the traitor's flagship in orbit. The destruction of the fortress' supports saw the entire structure collapse into the cavernous tunnels under the planet's surface, crashing and sinking into an immense lake of burning promethium below. The corrupted Imperator-titan and it's manible, severely wounded Warsmith Krendl, and completely destroyed the fortress along with its supply of wargear and resources. Overall destroying the traitor's objective, while having made them spend irreplaceable resources. Once onboard the traitor's flagship, Dantioch and his Iron Warriors fooled the crew into thinking they were members of the traitors, until they reached the bridge. A brief battle ensued against several members of the Sons of Horus, which saw Dantioch's loyalists victorious, who then commandeered the ship for themselves. Dantioch set course for Terra with the aim of assisting the Emperor in fortifying the Imperial Palace against the traitors.[1]

Dantioch eventually found himself on Sotha, helping the Ultramarines determine the function of an ancient xenos structure underneath Mount Pharos. He also became allies with Alexis Polux, overcoming Polux's reactionary hatred of the Iron Warriors by finding common ground between them. [2x] Through his work on the structure, known as the Pharos, he became a linchpin of Roboute Guilliman's Imperium Secundus due to the Pharos's ability to send not just messages, but matter across vast distances of space. He was later killed during the Battle of Sotha, sacrificing his own life to thwart the Night Lords of Krukesh by overloading the Pharos after his own capture.[4a] Dantioch died in the arms of Polux, his former enemy mourning his fallen brother.[4b]

Barabas Dantioch was recognized as the first Warden of the Pharos and a "Hero of the Imperium" by Guilliman's own decree. His mask remained within Mount Pharos atop the 'Aegidan Oath' sworn by Oberdeii as the new Warden of the Pharos, for almost a thousand years.[5] After Oberdeii became the Chapter Master of the Scythes of the Emperor, the mask was removed from its resting place, becoming a badge of office for the Chapter's highest rank.[5][7a]

After the Battle of Miral, Dantioch's mask, now know as "the mask of the Warden of the Pharos", was left upon the funeral pyre of Chapter Master Mansirius Thorcyra. With Sotha wiped of life by the Tyranids, a "Warden of the Pharos" was considered no longer needed.[7b]

By M42, Dantioch's story has been all but lost to legend, even among the Scythes of the Emperor. Dantioch's funeral pyre on Sotha having many myths surrounding it, "a traitor redeemed" being but one of them. The last Firstborn Chapter Master of the Scythes of the Emperor, Thracian, while not knowing who this "unknown warrior" was, believed that he would have been disappointed in the failings of the chapter.[8]