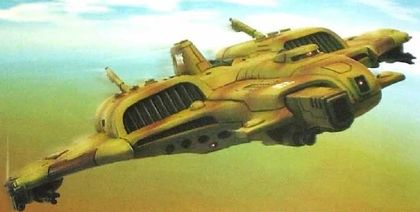 The Barracuda air superiority fighter is the Tau's most common atmospheric aircraft.

Faster than the Imperial Navy's Marauder bomber, but lacking the top speed of the Thunderbolt or Lightning fighter, it makes up for its shortcomings with its sophisticated electronics and pilots' natural talents.[1]

In a dogfight, Thunderbolts and Barracudas are very closely matched, with the Thunderbolt having the edge in speed but the Barracuda having the manoeuvrability. Despite this, the Imperium's pilots often have the hard edge of combat experience which the Tau's Air Caste pilots find difficult to match.[1]

A Barracuda is armed with a nose-mounted, pilot aimed Ion Cannon. This is the aircraft's primary weapon of use in dogfights, backed up by two drone controlled Burst Cannons in the wings. For ground attacks, it is primarily armed with wing mounted missile pods. When used in an ground attack role a Barracuda can carry additional armament of up to four Seeker missiles. These are not controlled by the pilot but by a Markerlight operator on the ground.[1]

All Barracudas are equipped with escape pods. In the event that the aircraft sustains serious damage the pilot can eject. Some versions of Barracuda might include Blacksun Filters (night-fighting sensors), Disruption Pod and Decoy Launchers for additional protection.[1] 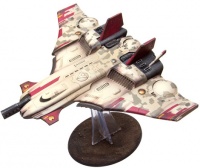 Not only engaging in dogfights, the Barracudas also targeted the Imperial Guard's supply columns, operating in unison with Pathfinder teams in order to destroy Trojans and vital equipment. The Barracudas played a vital role in the Tau's strategy, eventually defeating the Imperial Guard and forcing it to retreat.[1]

To combat the ever-increasing diversity of enemies faced by the expanding Tau Empire, the AX-5-2 Barracuda was developed as a multi-role fighter by the Earth Caste of the Vash’ya Sept. This new pattern maintained the unmatched agility and maneuverability of its forebears, but benefited from an improved power grid and enhanced combat avionics systems, as well as a variable weapons fit so that it could be rearmed swiftly between missions.[4]