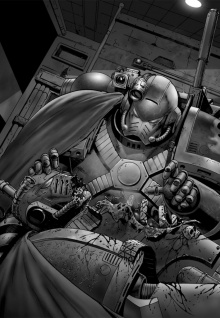 Barthusa Narek over a fallen comrade

Barthusa Narek was a member of the Word Bearers during the Great Crusade and the Horus Heresy. A highly skilled Scout Marine and sniper, Narek was secretly loyal to the Emperor but continued to fight alongside his traitor brothers, taking a wound while fighting against the Raven Guard on Isstvan V that lost him his place amongst the Legion's scout cadre. He later entered the service of Dark Apostle Valdrekk Elias, who sent him to retrieve the artifact known as the fulgurite on Traoris.[1]

Upon obtaining the fulgurite from Cabal agent John Grammaticus, Narek delivered the weapon to Elias and was ordered to hunt down the group of Shattered Legions marines that had taken Grammaticus into their protection. Commanding a small group of Word Bearers marines Narek pursued the enemy group relentlessly, but ultimately failed to capture Grammaticus and ended his partnership with Elias after the Apostle lost possession of the fulgurite. Breaking ties with his Legion, Narek resolved to hunt down Grammaticus and obtain the fulgurite so he could use it to kill Lorgar and save the Word Bearers from damnation.[1]

Narek was able to escape Traoris by persuading a pair of his fellow Word Bearers to teleport him through the Warp, but upon arrival on their destination world, Macragge, Narek's fellows revealed that they only aided him so that they could wreak havoc on the Ultramarines and attempted to kill him as a traitor to the legion, forcing Narek to kill them and go to ground. Narek was ultimately able to track down and capture Grammaticus, who had come to Macragge with the fulgurite as part of his own mission, but was wounded by Grammaticus's comrade Damon Prytanis and later incapacitated by Konrad Curze, who was loose on the planet. Discovered by the Ultramarines near Vulkan's corpse, Narek was imprisoned by for the primarch's murder.[2]

After a period of imprisonment, Narek was secretly rescued and smuggled off Macragge by Kaspian Hecht, an agent of Malcador the Sigillite and a powerful psyker who attempted to overwrite Narek's mind. Fighting back, Narek managed to kill Hecht but was left with parts of Hecht's psyche embedded in his own, leaving him with gaps in his memory and confused about his identity. Taking on Hecht's armour and identity, Narek commandeered a ship and made it to the space station Rampart, where he joined up with the Sixty-Six, refugee Salamanders attempting to ferry Vulkan's body back to Nocturne through the Ruinstorm. Narek aided the Salamanders during their perilous voyage but was discovered once his true identity resurfaced, forcing him to fight off both former allies and Word Bearers sent to hunt him before escaping to the surface of Nocturne.[3]

On Nocturne, Narek was confronted by Eldrad Ulthran who recruited the Word Bearer in his quest to eliminate the Cabal. Narek helped Ulthran kill several Cabal agents such as Gahet, Slau Dha, and Damon Prytanis. Afterwards, Eldrad allowed Narek to be on his way with a piece of the fulgurite. Narek was next seen rendezvous' with the Word Bearers, rejoining the legion while hiding his quest to kill Lorgar.[4]