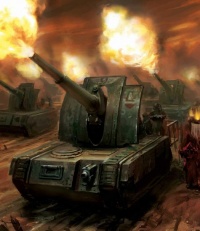 A battery of Basilisks firing. 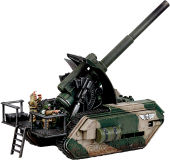 The Basilisk is the main line artillery piece of Imperial Guard Regiments throughout the Imperium, designed to provide medium to long-range fire support. Among the most numerous and well-known of the Guard's artillery the Basilik is based on the Chimera chassis and mounts an Earthshaker Cannon for direct and indirect fire.[1][2a][3][4]

While many regiments will have a mix of other artillery, including Manticores, Griffons and Bombards, and each one will have its own role to fill, it is the Basilisk which is the most common and most often to be called upon to bombard the enemy. These self-propelled artillery pieces are most effective when used in massive batteries of hundreds of guns to deliver devastating barrages on the enemy's position, while their mobility allows them to keep pace with infantry advances.[1][2a] This indirect fire will be directed by their parent company's forward observers or other officers trained to direct artillery,[3] and while not particularly accurate it allows the Basilisk to remain out of harms way as it blasts concealed enemy positions or fortifications from long range.[2a] Besides these sustained bombardments the power and range of the Earthshaker Cannon allows for other type of artillery missions: counter-battery fire to suppress enemy guns, box barrages to isolate enemy units and prevent their reinforcement, harassing fire, and destructive fire of selected targets.[5] Most missions use high explosive rounds, but to Basilisks are often issued other more specialized rounds, such as smoke shells, incendary shells and illumination shells for lighting up a battlefield at night.[3]

The powerful shells fired by the earthshaker cannon are capable of smashing apart the enemy lines with ease and are designed to cause catastrophic damage at the impact zone. Targets at the epicentre of such a detonation are immolated immediately, while those in the vicinity are pulverised by the deadly shock wave. The unmistakable shriek of the Basilisks’ incoming ordnance is rightly feared by the enemies of the Emperor.[6]

However the Basilisk has also proven its worth as an assault gun, using cannon's low angle of elevation to engage targets at short range in direct support of troops. The high explosive shells fired by the Basilisk are as devastating to infantry and tanks as they are to fortifications, however it is no replacement for a true Battle Tank.[2a][3] The lack of ablative armouring and exposed fighting position leaves the Basilisk highly exposed to enemy fire and hostile environments, although many patterns go some way towards correcting this by incorporating an Enclosed Crew Compartment.[2a][4] Basilisks tasked for direct fire support will be detached from their parent company and placed under the temporary command of the tank or infantry company it is intended to support.[3] Basilisk's have been observed in a variety of roles, such as anti-aircraft.[10]

During the Great Crusade and Horus Heresy, the Basilisk was also used by siege units of the Space Marine Legions.[7] The Iron Warriors, in particular, were noted to have fielded many in their role as expert siegebreakers.[8] The Ultramarines are also known to have fielded Basilisks.[9]

The Basilisk retains all the basic features of the Chimera but replaces the troop compartment for an open top firing platform for the main cannon and armoured gun shield. The driver and vehicle commander sit forward in the vehicle as in the Chimera, with the commander manning the Basilisk's hull-mounted Heavy Bolter, while the gunner and loader operate the cannon. Its main weapon is the Earthshaker Cannon, firing 132mm shells to a range of over fifteen kilometers and a muzzle velocity of 814 m/s.[1] Some Basilisk will incorporate an enclosed fighting compartment to provide additional protect for the exposed gunner and loader, however the added recoil restrictions means they are unable to use the more powerful six and seven charges when firing their cannons, slightly limiting their maximum range compared to open-topped or platform-based artillery.[4]

Basilisks also include a Searchlight and Smoke Launchers as standard, while many crews will modify their vehicle with Camo Netting, a Dozer Blade, Extra Armour, a Hunter-Killer Missile and/or a pintle-mounted Heavy Stubber/Storm Bolter.[2b]

The design of the Armageddon 'Hades'-pattern Basilisk bears similarities with several M2-era tanks, namely the Ferdinand/Elefant, the M109 howitzer, the AS-90 or the PzH 2000.