The Battle cannon is a larger and heavier version of the autocannon, its size restricting its use to vehicles only.[1] It is the primary weapon of the Leman Russ Battle Tank, where its explosive shells can decimate both infantry and other armour.[2] The Battle Cannon is also found on other Imperial vehicles, such as the Castigator Battle Tank[8] and Imperial Knights. Though Knights use a specialized Rapid Fire Battle Cannons with improved rate of fire.[6b]

The term 'battle cannon' is sometimes used in a general sense to cover a wide range of large calibre, projectile-firing weapons.[3a] The weapon mounted on the Leman Russ battle tank is a 120mm smoothbore gun,[4] surrounded by a water-cooled jacket and utilising gyrostabilisers to ensure accurate targeting while on the move.[5]

Most battle cannon shells share the same common features regardless of their type. This includes a ballistic cap for improved in-flight performance, a fuse set to detonate one of several ways such as upon impact or after a timed delay, explosive material contained within the shell casing, a propellant charge and tracer material to aid in targeting.[3a]

The standard round fired by Leman Russ battle cannons, HE shells like the Leman Russ Mk4 G4 round contain a highly explosive material such as Fyceline which detonates upon impact with the target. Since a high velocity is not necessary for the shell to work, a small amount of propellant allows for a larger amount of explosive material than in other shells. The explosion causes a blastwave lethal to anyone close by and shatters the thin shell casing into deadly high-speed shrapnel, making them deadly when used against infantry and light vehicles. While the sheer size of the blast can cause minor damage to armoured vehicles, even stun or kill the crew within, HE shells lack the penetrative power of true anti-tank shells.[3b]

Anti-tank or armour piercing shells like the standard Leman Russ Mk12 G4 round are used to destroy hardened targets such as enemy tanks or bunkers. They consist of a solid round topped with an adamantium tip covered by a soft metal cap. A large propellant charge launches the round at high velocities, where upon impact the metal cap melts and creates a "sticking" effect so that the adamantium tip does not slide off of sloped armor or break. Most AP shells cause damage through kinetic energy, the sheer violence of a penetrating hit causing spalling within the enemy tank's interior to damage internal systems and kill crew. Others include a small high explosive charge which detonates upon impact, causing additional secondary damage.[3b]

Inferno shells like the standard Leman Russ Mk7 G4 round, also known as incendiary, phosphorine or thermite shells, work in similar principle to HE shells. However instead of an explosive charge these shells are filled with a combustible substance which instantly is scattered upon impact. The substance burns instantly and is partiuclarly deadly when used against infantry.[3c]

Smoke shells are used to create an instant smoke screen, hiding the tank or other friendly forces from enemy observations.[3c]

Hunter shells are very rare tank rounds which can be fired by a battle cannon or Conqueror cannon. They contain a small logic-engine similar to the one found on Hunter-Killer Missiles which locks onto a target and directs the path of the shell towards it. Just before impact the shell's Machine Spirit causes it to rise above and hit the enemy vehicle on it's thinner top armour. Only ever produced on the Forge World Tigrus, the knowledge to construct Hunter shells was lost when the world was overrun by the Orks. Most tank crews will therefore never even see a Hunter shell, much less have the honour of firing one.[3d] 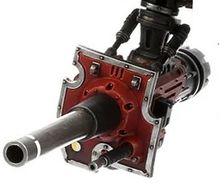 The Rapid-Fire Battle Cannon is a terrible and powerful weapon carried by Knight Paladins. This large-calibre artillery cannon uses an automatic loading mechanism which allows to to unleash a stream of high-explosive shells at a prodigious rate and accuracy. It is equally devastating blasting holes in massed infantry formations as it is wiping out squadrons of light and medium vehicles or engaging in long-range duels with enemy artillery pieces.[6a]