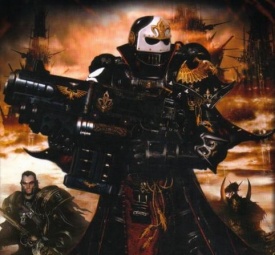 Battle Sisters are the primary troops used by the Sisters of Battle, the Orders Militant of the Adepta Sororitas.[1]

Battle Sisters are recruited solely from the female progena of the Schola Progenia facilities spread across the galaxy. They are orphans of the Imperial servants who have given their lives in the service of the Imperium. While being raised within the Schola they receive a strong Ecclesiarchal upbringing and education, coming to regard the Emperor as their spiritual father. Their training and education is brutal and known for its strict discipline.[4] Progena recruited into the Sisterhood are indoctrinated even further into the Imperial Cult, becoming even more fiercely devoted to the Emperor and the Imperial cause. They recieve ample physical training in addition to the spiritual, learning the art of armed and unarmed combat, squad-based tactics, and strategic thought. Their level of discipline is renowned, so much so that they do not require the psycho-indoctrination or neuro-enhancing surgeries of the Space Marines. Their fearless and indomitable presence on the battlefield serves to inspire others and can turn the tide of battle.[4]

Acting as the true fighting arm of the Ecclesiarchy, their duty as part of the Sisterhood is to ensure and enforce the physical and spiritual purity of humanity and the departments of the Adeptus Terra. As they frequently share the same role as the Ordo Hereticus, Battle Sisters often form a major part of Ordo Hereticus forces.

Each squad of Battle Sisters is led by a Sister Superior and often augmented by Dominions or Retributor sisters wielding special-issued weaponry.[4]