The Battle Barge is the largest Space Marine warship and is configured for close support of planetary landings. Battle Barges were originally a simple designation during the Great Crusade to refer to Battleships under Legiones Astartes control.[23][Conflicting sources] Today, most Chapters control two or three Battle Barges designed to deploy a fighting force to planets in a rapid fashion.[1]

Each Battle Barge is capable of deploying 3 Space Marine Companies plus supplies and support.[25] Large amounts of space are designed to hold launch bays for inter-system craft and drop pods allowing up to three Companies to deploy simultaneously.[1] The vessel is extremely heavily armored and well-shielded for breaching planetary defenses while also protecting its cargo. It is also a dangerous enemy, especially with boarding actions but also contains enough firepower to destroy all but the most powerful of warships. Battle Barges are some of the most powerful ships the Imperium has at its disposal, due to both the power of the ships and their contents. 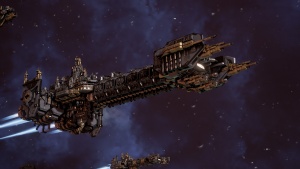 A Battle Barge of the Space Wolves[24]

Constructed with its unique role of low-orbit planetary assault in mind, the Battle Barges' skeletons were forged from an ultra-dense alloy. The rare base mineral can only be mined from the sites of recent volcanic eruptions, and is further hardened by ballast compression tanks situated on high-gravity moons. The pressurized environment hardens the alloy, ensuring the superstructure is as solid as the doors protecting the Emperor’s throne room itself. These inner frameworks were then girded in kilometres of hardened plasteel and adamantium, and edged with thick ferrocrete buttresses that surround the main hull like a reinforced rib-cage. Finally, a second and ablative layer of armour was added to each vessel's prow, forging an impenetrable figurehead for the indomitable fury of a Battle Barge.[22]

Protected in the Warp by Gellar Fields, in the Materium Battle Barges are protected by a group of layered void shields. The shields protecting a Battle Barge are among the most sophisticated that the Emperor’s armies have at their disposal. Segmented into a series of zones, it is possible for an area of shield to fail without leaving the ship entirely exposed. Further to this, energy can be siphoned from one zone to another, and redirected to where there is the most need of protection. In dire circumstances the shields' energy can be driven up past their normal maximum. This temporarily provides the Battle Barge with greater protection but soon burns out the generators, and renders the shields inert.[22]

The Battle Barge carries a compliment of three squadrons of Thunderhawks designed to act as either Attack Craft or orbit-to-surface transports.[1]

The primary weapons of any Battle Barge are their dorsal-mounted bombardment cannons. Each cannon comprises a series of heavyweight batteries, huge turret-mounted linear accelerators that launch salvos of heavy magma bomb warheads. As the name suggests, bombardment cannons were primarily developed to bombard planets from high orbit, a task at which they excel. A Battle Barge will begin firing as soon as it reaches orbit and will continue to rain destruction down on a planet even as its complement of Space Marines is hurled downwards in their assault craft, clearing a path for their deployment on the ground. Capable of obliterating almost any manner of planetary defences, bombardment cannons will first be directed against missile silos and laser towers, ensuring that the Space Marine attack force can proceed unmolested, before being used to take out command bunkers and shield generators, aiding their swift domination of the planet. On more than one occasion, a single salvo fired into a dense population centre has ended the conflict before it has gathered any real momentum, shocking a world's leaders into seeing the error of their ways and quickly swearing fealty to the Emperor once more.[22]

In ship-to-ship combat, Battle Barges rely primarily on Space Marine boarding actions. The class maintains a hefty compliment of Macro-cannons, Plasma projectors, Fusion Beamers, and missile launchers designed to overwhelm enemy defenses and shields, allowing for boarding to take place. In addition, if all else fails the Battle Barge may use its Bombardment Cannons against enemy vessels. Though they lack the range of a Lance, they make up for it in raw killing power.[22]

Battle Barges are frequently used to enact Exterminatus. As such, they usually also carry a lethal cargo of world-killing weaponry such as Cyclonic Torpedos and Virus Bombs.[22]

The Warspite Class Battleship is a sub-type of Battle Barge which was used by the Imperial Army during the Great Crusade and Horus Heresy.[23]

A model of a Space Marine Battle Barge

Although Battle Barges are usually classed as Battleships, at least one source lists a Heavy Cruiser as a Battle Barge (specifically the Black Templars vessel Night's Vigil).[26]