Battle for Armageddon was a strategic boardgame released by Games Workshop in 1992. Unlike the many miniatures-based games produced by GW, Armageddon was a more traditional counter and board game. It was one of four in GW's "Wargames Series", including Horus Heresy (Game) and Doom of the Eldar (Game), which used the same or similar principles.

The game represents the Second War for Armageddon, between the Ork Waaagh! led by Warlord Ghazghkull Mag Uruk Thraka, and the defending Imperial forces of the Hive World Armageddon, Overlord Herman von Strab, Commander Dante of the Blood Angels, and Imperial Commissar Yarrick. Concentrating on the Armageddon Secundus region of the planet, the game is a mixture of strategy and resource management.

The characters of Ghazghkull and Yarrick were later given rules for use in Warhammer 40,000 and Space Marine (Game). 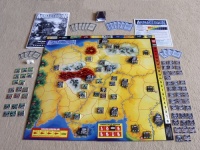