The Battle for Macragge was the concluding battle of the First Tyrannic War that stopped Hive Fleet Behemoth in 745.M41[2b] or 746.M41[5], depending on the source, on the Ultramarines' Homeworld of Macragge. Some older sources may refer to these events as the Battle of Macragge [1a]

Hive Fleet Behemoth, since its appearance in the Galaxy, had been advancing with unprecedented speed through Imperial worlds. Marneus Calgar, Chapter Master of the Ultramarines, declared that the Hive Fleet would be halted at Macragge before it drove deeper into the heart of the Imperium or before it consumed more of Ultramar. It had to be stopped at Macragge or another chance to stand against it would not be possible for several hundred light years.[1a]

Above Macragge, the Ultramarines marshalled an enormous battlefleet, including Starnova-class orbital weapon stations, dozens of warships, the Ultramarines' mighty Battle Barges, heavy cruisers of the Ultramar Defence Fleet, a ragtag collection of lightly-armed merchantmen and privateers, and the requisition of every single space-worthy vessel fit for combat. Meanwhile, a series of defenses were carefully constructed on the ground; if the Tyranids could not be stopped in orbit, Calgar's plan was for the defenders to fall back to the planet's polar fortresses and hold out until reinforcements arrived. When the Tyranids arrived, Macragge was ready for a fight.[1a]

The Tyranids, upon arriving in the system, were however not daunted in the least by the tremendous defences and without delay launched their assault. The defenders blew apart countless waves of Bio-vessels as they sped towards the planet, but with every wave more and more Mycetic Spores managed to break through to the planet's surface.[1a]

As the Tyranid creatures made planetfall, the land battle began. Calgar divided his forces into three armies. The primary and secondary task forces, composed of most of the 1st Company and Ultramar Planetary Defence Forces, bolstered the polar fortresses on the north and south poles of the planet; whilst Calgar led the largest taskforce, composed of the entire 2nd Company plus elements of the 1st, 5th and 10th Companies [3], in a series of rearguard attacks to attempt to slow the Tyranid onslaught and buy time for the 1st Company to further fortify the polar fortresses. At first the Ultramarines slowed the Tyranid advance for some time. But even under Calgar's incredible leadership, the Imperial forces were only delaying the inevitable oncoming horde and eventually Calgar made the decision to withdraw his forces further north. At the same time, the Sirocco Starport was infiltrated by Genestealers, which destroyed much of Calgar's shuttle fleet along with its pilots and Auxilia defenders. Having lost the bulk of his Auxilia forces but still needing to slow down the oncoming horde, Calgar set himself to making a stand at Cold Steel Ridge.[1a][2a] 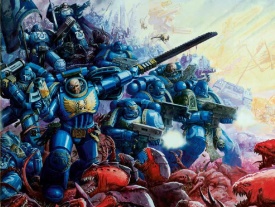 The Ultramarines battle against a wave of Tyranids on Macragge

Cold Steel Ridge was an industrial complex on the frozen northern seas of Macragge. It was home to a company of Defence Auxilia that were reinforced by a Baneblade tank, the Pride of Hera. [3]

The Hive Mind had by this point targeted Calgar as the main threat to the Tyranid advance. The Swarmlord, the Hive Mind's deadliest servant, was dispatched to deal with him. The arrival of this unique beast was the turning point of the battle, for the defenders were beginning to grasp the near-mindless, rampaging way in which the swarms attacked, but now the Swarmlord's influence infused the Tyranids with a keen strategy. The defender's left flank was suddenly assaulted by tunneling Raveners, which only served as a diversion to lead the Ultramarines away from the Swarmlord's true target - the Pride of Hera. The Baneblade was left wide open for a wave of Carnifexes to rip it apart. Calgar watched as his enemy's tactics unfolded. Gargoyles and Harpies preyed upon officers and sergeants of the Auxilia units. Biovores bombarded the defenders and forced them to spread out to minimize casualties, but this in turn left them vulnerable to Mawloc and Trygon attacks. The Ultramarines reacted to each threat with valor and bolstered weakened sections of their line; however they were outnumbered and outmatched. Then the Swarmlord, with a bodyguard of Tyrant Guard and Tyranid Warriors, bellowed a challenge to Calgar and charged directly towards his position. The Ultramarines rushed to aid their Chapter Master, but even this movement was planned for by the Swarmlord. Hundreds of apparently dead Hormagants strewn across the ground leapt to sudden life and bogged down the Space Marines, delaying them from reaching Calgar. The Ultramarines Honour Guard could not stop the Swarmlord from rending, tearing and gravely wounding Calgar. Just in time, Thunderhawk Gunships arrived from orbit and blasted the Tyranids back to clear enough room to land and evacuate the survivors. Commander of the Guard Aloysius held back the Swarmlord and its attending Tyrant Guard as the rest of the Honour Guard helped Calgar to safety. Just as Aloysius fell to the Swarmlord's blades, the Thunderhawks lifted off to return to the Battle Barge Octavius in orbit above Macragge. Cold Steel Ridge was taken by the Tyranids, leaving the path to the northern polar fortress clear.[1a]

While the ground battle was taking place, Macragge's orbital space defences had been all but destroyed by the Tyranid fleet. Access to Macragge was open and the Hive Fleet intensified its invasion by raining thousands upon thousands of Mycetic Spores directly onto the vital polar fortresses. Arriving on Octavius, Calgar took command of the surviving Imperial fleet and coordinated raids on the Tyranid vessels as they were spreading out to surround the planet. However, having delivered their cargo of spores, all the bio-vessels broke from orbit to lure Calgar's fleet away from Macragge. Calgar pursued the retreating fleet to the ringed world of Circe at the edge of the Macragge System, where both sides had planned an ambush. The Tyranids had a second fleet concealed amongst Circe's rings and sprung their trap first. However reinforcements of over two hundred warships[4] from the Tempestus Fleet dropped into Real Space and caught the Tyranid fleet in a pincer. But still the Tyranids had superiority in numbers, until the Emperor Class Battleship Dominus Astra valiantly charged into the heart of Hive Fleet Behemoth and detonated its Warp Drives, creating a cataclysmic vortex that sucked both it and the entire Tyranid fleet into oblivion. The victory at Circe spelled the defeat of Behemoth, but it was still undecided whether Macragge would survive.[1a]

Meanwhile on Macragge, the reinforced Tyranids threw themselves at the northern and southern polar fortresses. In the south, the defenders were slowly forced back. In the north, the Swarmlord itself led the assault against the grand walls. Captain Saul Invictus, commander of the 1st Company, controlled the northern defences but the Swarmlord managed to exploit every gap.[1a] Titans of Legio Praetor stalked the ice fields and blew massive furrows in the hordes, but eventually the defenders were pushed deeper into the fortresses.[2a]

With the Tyranid fleet destroyed in space, Calgar's forces made haste back to Macragge where all contact had been lost with the polar fortresses. The 3rd and 7th Companies were sent ahead in their fast Strike Cruisers. Reaching the surface, they found scenes of unbelievable carnage. The 7th Company landed on the southern fortress and amazingly found survivors from the garrison. Uniting together, they plunged into and cleansed the subterranean passages of the southern fortress that were overrun by Tyranids. The 3rd Company landed on the northern fortress and immediately came under attack as hundreds of Tyranid creatures poured out of the fortress's dark passages. Only the Company's Devastator Squads kept the swarms back until Thunderhawks arrived to blast the creatures back below ground. After the arrival of the Company's three Dreadnoughts, they pushed into the subterranean tunnels to find them littered with Tyranid and Ultramarine bodies. They burnt their way along the passages with Flamers and eventually came upon the lower penitorium where the 1st Company had made their last stand. Within the room, a circle of Terminators lay where they had fought back to back. They found the entire 1st Company had been killed to the last man defending Macragge.[1a][2a]

Behemoth had been ended, but it would be years before its creatures were scoured from Macragge and before the Ultramarines and Ultramar could replace all their losses. The Swarmlord was officially listed as destroyed, but no corpse was ever found.[1a][2a] Commander Dante committed several companies of the Blood Angels to assist the under-strength Ultramarines in scouring the remaining Tyranids from Ultramar.[7]

The 1st Company's operational strength remained below fifty percent until 841.M41, ninety-six years later, and the Chapter did not officially record that it had replaced its losses from the Battle until 861.M41, one hundred and sixteen years later[2b]. Chaplain Ortan Cassius, the Ultramarines' Master of Sanctity, who had accompanied the 3rd Company in their desperate fight to relieve the 1st, asked for and received permission from Calgar to create a special unit of Tyrannic War Veterans, which have grown steadily over the years in both numbers and experience, as the Imperium continues to clash with the Hive Fleets[2c].

A sliver of Behemoth had attacked the neighboring world of Calth, spearheaded by Old One Eye, a monstrous Carnifex. Although this swarm was defeated, Old One Eye would rise again decades later[1b].