Battle for the Abyss (Novel)

Battle for the Abyss is a novel by Ben Counter, and the eighth book in the Horus Heresy Series. Published in August, 2008, a sneak release of the book became available in July 2008. It was later included in "The Novels: Volume 2" eBook collection.

The novel concentrates entirely on a giant Word Bearers space vessel, the Furious Abyss, and the attempts of a rag-tag loyalist fleet to destroy it before it can launch an attack on the Ultramarines homeworld Macragge.

Now that news of Horus's treachery is in the open, a time of testing has come. Some Legions have already declared their allegiance to the Warmaster, while the loyalty of others lies firmly with the Emperor. As Horus deploys his forces, loyalist Astartes learn that a massive Word Bearers fleet is heading to Ultramar, home of the Ultramarines. Unless they can intercept the fleet, and destroy the mighty battleship that has been sent to reinforce it, the Ultramarines may suffer a blow from which they will never recover.

Zadkiel, a commander of the Word Bearers Legion, gives a speech to his massed followers at the launching of the Furious Abyss, a massive battleship constructed in secret by the Mechanicum on the little-known asteroid Thule. Shortly after the Word Bearers embark and the Abyss takes off, Thule is destroyed to keep the ship's construction secret.

Ultramarine Captain Hektor is on-route to Vangelis Spaceport aboard the Fist of Macragge when it encounters the Furious Abyss and is destroyed. In his last moments Hektor orders that a warning be sent to the spaceport.

At Vangelis Spaceport, an Honour Guard squad of Ultramarines led by Lysimachus Cestus receive the astropathic warning sent by the Fist of Macragge as a sequence of ambiguous symbols. A psychic backlash from the station's astropaths threatens to overload the station's reactor, but Cestus and his second-in-command Antiges avert the disaster with the aid of Brynngar Sturmdreng, a Wolf Guard staying on the station with two squads of Blood Claws. Cestus glimpses Macragge in the flash of the overloading reactor accompanied by a feeling of dread. He gathers all of the Astartes on the station: twenty World Eaters led by Skraal and a lone Thousand Son, Mhotep, in addition to the Honour Guard squad and Brynngar with his twenty Blood Claws, and convinces them to join him in investigating the Fist of Macragge's destruction. He commandeers a small group of vessels from the Saturnine Fleet led by Admiral Kaminska which consists of her flagship Wrathful, four escort ships and the fighter carrier Boundless, to which Mhotep adds his personal vessel Waning Moon, and leads them to the site of the Fist of Macragge's destruction.

Encountering the Furious Abyss, the loyalist fleet launches an attack on the traitor vessel. The Waning Moon, the Boundless and three of the Wrathful's escorts are destroyed in the battle but the Waning Moon scores a lucky hit on the Furious Abyss that damages its coolant system and Mhotep escapes his ship's destruction in a saviour pod. Flights of fighters launched from the Boundless are destroyed when psykers aboard the Abyss cause their crews to turn on each other. The Furious Abyss enters the Warp and the remaining loyalist ships Wrathful and Fireblade give chase.

Passing through the Warp the Fireblade is taken over by daemons which cross onto the Wrathful when it docks to make repairs. The loyalist Astartes spearhead the defense of the Wrathful but Mhotep breaks the Edict of Nikaea in order to drive the possessed Fireblade away and is confined after the battle. Emerging in realspace once more, the Wrathful destroys what is left of the Fireblade.

The Furious Abyss docks at Bakka Triumveron to repair its coolant systems and Cestus plans an assault on the ship whilst it is docked. Antiges demands to take Cestus's place leading the assault as Cestus himself is too valuable to risk and Cestus reluctantly agrees. Forewarned of the impending attack by daemons of the Warp, Zadkiel places an over-ambitious underling named Ultis in charge of an ambush and gives assault-captain Baelanos secret orders to kill him. Ambushed at the docks, the loyalist assault team divides into two groups, Brynngar and his Blood Claws fighting off the ambushers while Antiges, Skraal and the World Eaters fight their way towards the ship. Brynngar mortally wounds Baelanos in single combat and his Blood Claws beat the ambush and capture Ultis, but the assault fails and only Antiges, Skraal and three other World Eaters make it aboard the Furious Abyss. The other World Eaters are quickly killed and Antiges is killed by Zadkiel's subordinate, Reskiel, leaving Skraal trapped and alone in the bowels of the ship as the Abyss takes off.

Pursuing the Furious Abyss through the Warp once more, Brynngar attempts to torture the Word Bearers' plans out of Ultis but does not succeed. Given no other choice, Cestus releases Mhotep and has him use his psyker powers to lift Zadkiel's plan directly from Ultis's mind. The Furious Abyss sends daemons at the Wrathful which break through its Geller field and attack the crew. Three of the Honour Guard are killed fighting the daemons and the rest are only saved by Mhotep who employs his sorcerous powers to banish the foe, only to collapse unconscious afterwards without having had the chance to tell anyone what he learned from Ultis. Cestus's continual sanction of Mhotep's powers leads Brynngar to challenge him to an honour duel, which Cestus narrowly wins but loses his friendship with Brynngar over. Mhotep then awakens and reveals Zadkiel's plans.

The Furious Abyss arrives in the Macragge system and positions itself to destroy Formaska, Macragge's second moon, the debris from which will shield it as it approaches the planet to deliver a lethal virus bomb. The Wrathful arrives and launches a suicidal attack, distracting the Abyss long enough to deploy boarding craft before taking fatal damage. Two more of the Honour Guard are killed when their shuttle slams into the side of the Abyss but Cestus and three others make it aboard and attack the torpedo deck, attempting to destroy the warheads primed to launch at Formaska. Two of them are killed by enemy fire by the time melta bombs are planted and then the ship's psykers launch a mental assault that overwhelms Cestus and his last comrade. Elsewhere in the ship, the psyker attack sends Brynngar temporarily mad and he slaughters his own Blood Claws. Out for revenge he encounters Baelanos partially interred in a Dreadnought and engages in a rematch of their previous duel, but only wins when Skraal appears after spending weeks on the run in the ship's bowels and aids him. Cestus, now the only Ultramarine survivor, arrives as well having endured the psychic attack and leads the trio towards the ship's plasma reactor which they must destroy as their last hope of stopping the Abyss.

Aboard the dying Wrathful, Mhotep encounters a daemon named Wsoric employed by the Word Bearers that has slaughtered Admiral Kaminska and the bridge crew and is responsible for slowly turning Brynngar against Mhotep and Cestus. The two fight a climactic duel which ends when Mhotep stuffs a grenade through a breach in Wsoric's form and destroys him from within, before accepting his fate as the Wrathful is caught in Formaska's gravity and plummets towards the surface. Aboard the Furious Abyss, Cestus, Brynngar and Skraal evade the many Word Bearers hunting them and Cestus and Brynngar lure Reskiel into a trap so Skraal can kill him. Fired up on bloodlust Skraal makes a suicidal charge at Zadkiel and injures the Word Bearer's hand before being shot dead. Cestus and Brynngar reach the reactor where Cestus plans to sacrifice himself in the process of destroying the ship, but Brynngar knocks him down and takes the explosives instead, diving into the reactor's core with the explosives strapped to his body. As a chain reaction begins to destroy the Furious Abyss Cestus pursues Zadkiel to the shuttle bays and they fight a final duel, which Cestus wins after chopping off Zadkiel's hand and then head. Mortally wounded during the fight, Cestus collapses next to Zadkiel's corpse and dies as the Furious Abyss is blown apart. 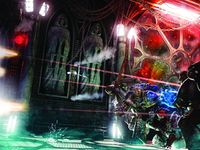