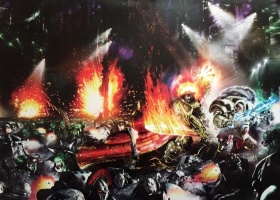 The Emperor and Horus fight together during the Battle of Gorro

The Battle of Gorro was a battle of the early Great Crusade.[1][2]

Waged in the Telon Reach, against an Ork Empire described as a "satrapy" of that of Ullanor. 1,000 warships led by the Emperor in the Imperator Somnium and a younger Horus in the Vengeful Spirit swept aside the Ork orbital defenses and fleet before descending on the Mekboyz-dominated "scrapworld" of Gorro. The Justaerin and Custodian Guard accompanied the Emperor and Horus as they led the assault on the planet. Using his supreme psychic might, the Emperor teleported across the battlefield and slew dozens of Orks with each strike.[1]

However despite this imposing assault, the Orks of Garro proved larger than normal and were heavily augmented by Mekboyz Bionics. At the height of the battle, the Warboss of Gorro led an attack that separated the Emperor from his forces. The Warboss tackled the Emperor, and was nearly throttling him until Horus arrived and cut off one of the huge Greenskins arms. Having repaid the debt to the Emperor owed since the Siege of Reillis, the Emperor and Horus finished off the Warboss before leading their forces to victory.1[2]