The Battle of Phall was fought between the Iron Warriors and Imperial Fists early in the Horus Heresy. The engagement resulted in a draw, which is attributed as a major cause for why the Horus Heresy was prolonged over several years rather than ending in months with a Horus victory.[4]

After intercepting the Death Guard ship Eisenstein, Imperial Fist Primarch Rogal Dorn was informed that Horus led the Sons of Horus, Death Guard, Emperor's Children, and World Eater legions in rebellion after slaughter any loyalists within their forces. Dorn responded by creating a "Retribution Fleet" that would strike against the traitors and bring them to heel. The fleet, representing 1/3rd of the Imperial Fist forces, was set upon by turbulence in the warp and lost many ships before becoming becalmed in the Phall System.

After intercepting the Death Guard ship Eisenstein, Rogal Dorn was informed of Horus's treachery at Isstvan III: he led the Sons of Horus, Death Guard, Emperor's Children, and World Eater legions in a purge of any legionary who was loyal to the Emperor before rebelling against Imperial rule. Dorn responded immediately by divided his legion in two. He would lead the Legion’s veteran companies to Terra to inform the Emperor of the betrayal unfolding. Meanwhile, Dorn ordered Sigismund to lead the remainder of the Legion as a "Retribution Fleet" to the Isstvan system. The Retribution Fleet was to reinforce the loyalist elements of the Traitor Legions and strike back at Horus.[5]

However, shortly before the fleet departed from the Phalanx, Sigismund met with Euphrati Keeler, who warned him of the cataclysmic battle to come on Terra. Sigismund decided that his duty was to remain at his primarch's side, despite Dorn's orders, and so requested that command of the fleet be given to someone else.[3a] Dorn acceded, and command of the fleet fell to Captain Yonnad.[3b]

Under Yonnad's command, the Retribution Fleet was composed of approximately one-third of the Imperial Fists' warriors and fleet, numbering over 561 warships and 300 companies of Astartes [3b]. These forces were augmented by Astra Militaris from the Sol System and elements of the Saturine Reserve Fleet.[1][4]

To support Horus, the Gods of Chaos had afflicted the Warp with terrible storms to obstruct the Imperium's response to Isstvan. The storms severely disrupted the Imperial Fist deployment by denying astropaths the ability to navigate and psychically communicate across long distances.[1] The storms were so severe that they destroyed approximately a third of the Retribution Fleet (reducing its strength to 363 warships)[3b] during the attempted navigation to the Isstvan System. Fleet Master Yonnad was killed during the voyage and command over the Fleet was transferred to Captain Alexis Polux, who was Yonnad's greatest pupil.[3b] Although there were more experienced commanders within the Fleet, Polux was considered by Yonnad to have a spark of genius and untapped potential. [4]

Ultimately, the Retribution Fleet was unable to find a way through the warp storms to the Isstvan System and lost half of its astropaths during attempts to communicate with Terra.[3d] But a break in the Warp Storm was discovered in the Phall System and Fleet Master Polux ordered the Retribution set up a temporary base of operations there lieu of risking additional mass attempts at warp transit. [4]

Operations at the Phall System

The Phall System consisted of two habitable agri worlds, Phall I and II. Both were recorded as peaceful, loyal to the Imperium, and lightly populated.[4] Captain Amandus Tyr, a veteran commander, favored resuming aggressive attempts to navigate to the Isstvan system. Polux rejected this idea, but allowed Tyr to command ten ships to search for a break in the warp storms that would allow journey to the Isstvan system or communication with the Imperium.[3d]

After discovering no trace of the inhabitants of Phall I and II, Polux put the Retribution Fleet on a state of high readiness. The Fleet formed into a constantly changing spherical formation on the edge of the system that would allow for effective defensive operations and rapid warp translation if ordered to withdraw or proceed to Isstvan. Crews drilled constantly, commanders developed contingency plans for defending the fleet, the surrounding system was surveyed in detail, and Polux ordered reserve supplies be used to fully repair the vessels under his command.[4]

The Loyalist fleet was unaware that after the traitor victory at Isstvan V, Horus ordered the Iron Warriors to intercept them, believing such a large force should not go unmolested.[2] Ahead of the attack, Iron Warriors scouting ships collected intelligence on the Retribution Fleet, which was psychically transmitted to hundreds of psi-amplifying devices across the system made up of communication systems cyberneticaly joined to brutalized astropaths. When these devices received the intelligence gathered by the Iron Warriors scouting vessels, they detonated in massive psychic blasts to transmit their information through the warp storms and back to the main fleet.[3c]

The psychic blasts from the psi-amplifiers subjected the Imperial Fists and their cohorts to painful screams, visions and other psychic affects. While the the event killed a small number of human crew in the Fleet, it was determined not to be an attack but, instead, a psychic signal of some kind. While the Imperial Fists could not determine who was behind planting the devices, they assumed it was the prelude to an attack from an unknown enemy.[3e][4]

The Iron Warriors' strategy was to plunge themselves into the heart of the Imperial Fists fleet, scatter their formation, and destroy them piecemeal.[1] However, the spherical formation and high readiness of the Retribution Fleet denied the Iron Warriors a decisive point to target and enabled the Imperial Fists to quickly adapt their posture to defend against the attack. For this reason, history has recorded the Iron Warriors attack on the Retribution Fleet as "a fist punching an orrery of smoke."[4]

During the battle, Perturabo ordered his staff to locate and capture Sigismund, who he believed was in command of the Retribution Fleet. But when it was reported to him that the lower-order Alexis Polux was instead in command, he became so enraged that he critically wounded the Captain who brought him the news, Berossus.[3c] 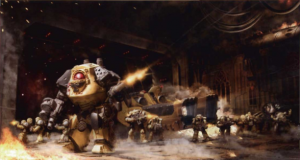 The Imperial Fists immediately counterattacked. Some areas of the formation withdrew and reformed, others held firm, while others feigned retreat and then conducted brazen maneuvers to return and attack the Iron Warrior fleet. In the battle that ensued, millions of crew were killed. The Iron Warrior fleet benefited from being more heavily armoured than their loyalist counterparts, albeit at the cost of speed. The Imperial Fists vessels were better equipped on the whole owing to their being stationed in the Sol System, which gave them the benefit of regularly being refreshed with the most advanced Imperial technology, including vortex warheads.[4]

As the battle continued, the Imperial Fists gained the advantage. Slower battleships drew fire while fast strike groups conducted hit-and-run attacks against the edges of the Iron Warrior cone-like formation, peeling back its layers of defense from the outside-in. These tactics were very successful, with one strike group led by Captain Amandus Tyr aboard the Halcyon achieving a kill ratio of 4-to-1. The effectiveness of the Imperial Fists defense has been credited to their high readiness, technological edge, and the performance of Fleet master Polux, whom history has recorded as being among the few Astartes who could rival - or exceed - the mental abilities of some primarchs.[3c] 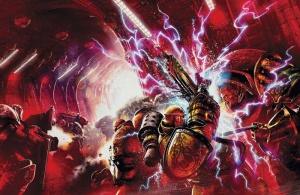 Imperial Fists under the command of Captain Amandus Tyr engage Iron Warriors Primarch Perturabo in close-quarters aboard his flagship, the Iron Blood.

In the course of the Retribution Fleet's counterattacks, Captain Tyr discovered Perturabo's flagship, the Iron Blood at the center of the Iron Warriors formation. Upon reporting the discovery to Fleet Master Polux, he was ordered to assume command over a sub-fleet of 50 ships and execute the traitor primarch. Tyr and Halcyon led a group of a dozen other strike cruisers to strike at the group of forces defending the Iron Blood to draw it into the battle. Then, 15 additional Imperial Fists warships entered the engagement from below, targeting the primarch's escort vessels and launching 1,300 astartes in a boarding action against Iron Blood. Captain Tyr led the boarding action.[3c]

Fighting aboard Iron Blood was fierce. A second wave of Imperial Fists was to reinforce the boarding action, but it never arrived. When Captain Tyr reached the inner sanctum of the ship where Perturabo resided, he had only 14 terminators and 30 Astartes in Mark III "Iron Armor" with him. All of the Imperial Fists, including Amandus Tyr, were killed in the final assault against the primarch.[3c]

Just as the Retribution Fleet was pressing its advantage, it received a psychic message on behalf of Rogal Dorn ordering their immediate return to Terra. This was the Fleet's first contact with the Imperium in months.[1] Pollux knew that loyally following the order would come at the price of forfeiting victory against the Iron Warriors fleet and inflicting a blow from which the traitor legion would not be able to recover. However, the loyalists were not aware of the broader situation across the galaxy and believed it was possible Terra itself was under attack. Polux ordered the Retribution Fleet to disengage and set course for Terra, sustaining grievous losses in the process.[3c] A number of light cruisers were deployed to cover their withdrawal, all of which were lost to the pursuing Iron Warrior battle barges.[1]

Rogal Dorn had issued the recall months before, as soon as he had learned that the Alpha Legion, the Night Lords, the Iron Warriors, and the Word Bearers, had all joined Horus's rebellion, making the traitor forces a much greater threat than he anticipated. Astropaths had been continuously broadcasting for months, unable to penetrate the warp storms until that moment.[3c] It has been speculated that the Chaos Gods allowed the psychic message through, in order to prevent the Iron Warriors' fleet from being destroyed, aware that the Imperial Fists were winning the battle, but also that their strict discipline would impel them to withdraw from the battle, even as they were winning.[4]

As the Retribution Fleet was withdrawing, the Iron Warriors aboard the vessel Contrador commanded by Captain Erasmus Golg boarded Captain Polux's warship, the Tribune, which was ultimately destroyed. But before theTribune was lost, Polux led a boarding operation of his own against the Contrador. The action was successful. Captain Polux killed Captain Golg in hand-to-hand combat and took control of the Contrador, broke away from the Iron Warriors armada, and joined the remaining Retribution Fleet on course for Terra.[3c]

The engagement was not the decisive victory sought by the Iron Warriors, with both the loyalist and traitor fleets suffering significant losses in equal measure. Only a third of the Retribution Fleet survived.[4] After making a hasty jump from the Phall system, the remnant of the Retribution Fleet was misguided to Ultramar by the Pharos in the Imperium Secundus.[3f] Following the Imperial Fists withdrawal, Perturabo smashed the consoles on the bridge of the Iron Blood in a fit of temper when it became clear that his forces escaped defeat only because of the Retribution Fleet's sudden suicidal withdrawal.[3c]

In the months after the battle, Perturabo became increasingly saturnine and volatile, to the point where even his closest captains could not be sure of his favor or the rationality of his judgments. One sure way to provoke the primarch's rage, Forrix later remarked to Barban Falk, was to speak of the Imperial Fists in any terms other than hatred and contempt.[6]

The Fists' failed assassination attempt on Perturabo aboard the Iron Blood also prompted the creation of the Iron Circle, a bodyguard unit composed exclusively of Domitar Class Robots.[6]