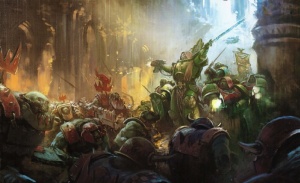 The Battle for Piscina IV[2]

The Battle of Piscina IV was waged as part of the greater Third War for Armageddon campaign[1] in 997.M41[4], pitting the Dark Angels against Ork forces under Ghazghkull Mag Uruk Thraka and his ally, Nazdreg Ug Urdgrub on the world of Piscina IV.[1]

During the battle, the site of Koth Ridge became an intense bloodbath between the Orks and many Dark Angels companies. Interrogator-Chaplain Boreas was one of the key players in this battle[1], as was Veteran Sergeant Naaman. The Orks had set up a tellyporta system to bring more of their troops in from off-world, under the direction of the Warlords Ghazghkull Mag Uruk Thraka and Nazdreg Ug Urdgrub. Naaman was one of the Dark Angels who was lost, but he and his Scout Company held off the Ork advance long enough for the Deathwing to arrive and disable the energy relays and destroy the tellyportas.[1] Later, utterly outnumbered, the Dark Angels 3rd Company under the command of Master Belial (later to become Grand Master of the Deathwing) made good their defences, preparing to sell their lives dearly until the rest of the Chapter could arrive to reinforce them.[3]

Though by results of battle Orks were defeated they fully tested their new tellyportas 'now-wot, with witch Thraka was intended to bypass later the Armageddon defences.[4]

There are also uncorroborated reports that Harbingers Chapter also fought in this battle.[4]