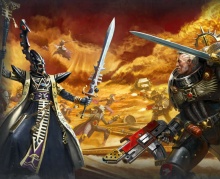 The Battle of Port Demesnus was an incident in the closing days of the 41st Millennium.

The seeds for the battle were sewn when the Eldar Farseer of Ulthwe, Eldrad Ulthran, developed an ambitious plan to awaken Ynnead and bring about the destruction of Slaanesh. Allying with Harlequins, Eldrad planned to use the remains of Farseers known as Crystal Seers to channel a summoning ritual through every Infinity Circuit in the Galaxy. Eldrad's greatest problem was that the ritual required a psychic medium of great power, something which could only be accomplished on the crystal moon of Coheria, which was in Imperial hands.[1]

Keeping the truth of the ritual from allied Autarchs, Eldrad was able to get forces from Ulthwe and Saim-Hann to launch a diversionary attack on an Imperial Navy base on Coheria. This left the crystal moon largely undefended, and Eldrad and his Harlequin allies were able to begin the ritual undisturbed. However, a Deathwatch Kill-Team led by Artemis arrived. After a vicious battle, Artemis and his Battle-Brothers were able to destabilize the ritual and force Eldrad to flee as Coheria exploded.[1]