The Signus Campaign was a major battle of the Horus Heresy which saw the Blood Angels besieged by the Daemonic hordes of the Bloodthirster Ka'Bandha.[1a][1b] 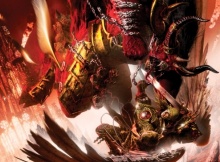 In an effort to divide the loyalist forces, Horus had dispatched those Legions who could not be swayed to his cause to the furthest reaches of Imperial Space, setting traps for them in the hopes that they would either be destroyed or too bogged down to assist the Emperor until it was too late. However, Horus, with the advice of Erebus, decided that he could use the Blood Angels Gene-seed flaw known as the Red Thirst to his advantage, and have Sanguinius and his Legion fall to Khorne. In truth, however, there was much discord between the Chaos forces on the overall strategy. The Ruinous Powers, the Keeper of Secrets Kyriss, and Word Bearers First Chaplain Erebus wished to convert Sanguinius to their banner while Horus, the Bloodthirster Ka'Bandha, and the Dark Apostle Tanus Kreed saw the Primarch as too steadfast. Instead, they wanted Sanguinius dead and the corrupted Blood Angels brought under the Warmaster's banner. In addition, Horus saw Sanguinius as a potential rival within his own ranks.[2]

Horus dispatched a Word Bearers detachment under the Word Bearers Chaplain Tanus Kreed to inform the Blood Angels that they had been tasked by the Warmaster with the cleansing of the Signus Cluster, which Horus claimed to be under the control of xenos tyrants known as the Nephilim. Sanguinius had no reason to doubt his brother Primarch and was unaware of the treachery of the Isstvan System, and so it was that he and his walked blindly into the snare set for them.[1a] Horus further tempted Sanguinius by stating that the Nephilim may have technology that could cure the Red Thirst.[2] Accompanying the Blood Angels were a small force of Imperial Army and Legio Cybernetica as well as a contingent of Space Wolves. In addition, 3,420 Word Bearers under Tanus Kreed's command were present aboard the Cruiser Dark Page.[5] Meanwhile, the Signus System was overrun after Horus sent the Serpent Lodge Priest Bruja to unleash a vast Daemonic horde by serving as a vessel for the Keeper of Secrets Kyriss the Perverse to enter the Materium.[2]

The Blooding of Signus 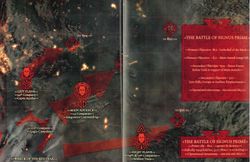 The Battle on Signus Prime

Upon arrival in Signus, the Blood Angels witnessed strange cosmic phenomena. A shadowy membrane covered the entire system to bar their escape, while the planet Phoros fractured into daemonic runes. On Holst, the Blood Angels sent forces to search for human survivors but were beset by creatures of wreckage as derelict hulls in orbit swarmed their fleet and the corrupted world was subjected to Exterminatus.[2] Sanguinius ordered additional expeditions to the inner Signus worlds of Scoltrum and Ta-loc. On Scoltrum, the Blood Angels found vast fires but little signs of life outside of the wreck of the System Defense Frigate Stark Dagger. The Blood Angels 24th Company under Captain Nakir and Cybernetica robots under Archmagos Domina Shroul were sent to investigate and for the first time in the battle encountered Daemons directly. The Imperials conducted a fighting withdrawal. On Ta-loc, the 11th and 94th Companies under Maulgrehn were trapped by Daemonic forces once they ventured underground, causing a desperate fighting retreat that took eight hours. Upon both of these engagements, Sanguinius ordered localized orbital bombardment against their foes but these achieved little.[4b]

The real crisis, however, began at Signus Prime, where the raw power of the warp was unleashed upon the fleet. Many of the non-space marine crew went mad from exposure, and the Blood Angels were forced to detain them while many more went insane and began killing each other. The Chronometers of the fleet read the insane date of 666666666.M31.[4b] In the midst of this, the Keeper of Secrets Kyriss the Perverse sent an image of itself directly into the chamber of Sanguinius, daring the Primarch to attack. The Lord of the Blood Angels rose to the challenge. The Blood Angels fleet was soon assailed by an armada of corpse-vessels, creating a pitched engagement where the Imperials took heavy losses. Shortly after the Imperial Army Admiral Athene DuCade joined those who lost their sanity, and plunged the Blood Angels flagship Red Tear into the planet.[2] Sanguinius steered the Red Tear into a rough emergency landing, and unleashed the fury of his Legion upon Signus Prime, personally leading his elite companies in an assault on Kyriss's palace known as the Cathedral of the Mark. As the Blood Angels were beset by vast Daemonic legions, treacherous Word Bearers, and human Chaos Cultists, Chapter Master Raldoron and Apothecary Meros led the assault on the Cathedral.[2] The Cathedral could not be targeted by the orbiting Heavy Cruiser Scarlet Liberty, its sensors and targeting arrays jamming whenever it attempted to lock onto the position.[3b]

As Sanguinius and his forces neared the palace of Kyriss the Perverse, a massive daemon the colour of dried blood rose to meet him. Its name was Ka'Bandha, Greater Daemon of Khorne. Ka'Bandha attempted to coerce Sanguinius to the cause of Khorne, but the Lord of the Blood Angels could not be swayed, and attacked the Bloodthirster. He dealt the daemon a vicious wound, but was in turn cast to the ground, his legs crushed by the coils of the beast's whip. As he watched, helpless, Ka'Bandha slaughtered his way through the Blood Angels, killing over 500 of them as he summoned a swarm of malignant energy generated from the device known as the Ragefire, which corrupted the planet. The massive psychic trauma knocked Sanguinius into unconsciousness, and unlocked something dark within the members of his Legion.[1b]

With the fall of their Lord and the butchering of their brethren, the Blood Angels were consumed by a dark rage that drove them into the daemonic horde with a berserker's fury known as the Red Thirst. In their rage, Blood Angels led by Nassir Amit massacred the Space Wolves attached to the Blood Angels Expeditionary Fleet as well as remaining Human Cultists and Word Bearers. A few members of the chapter such as a group of former Librarians led by Mkani Kano were able to resist the Red Thirst and reawakened Sanguinius by using a method forbidden by the Council of Nikea. Sanguinius recovered and, despite his injuries, met Ka'Bandha for a second round of combat, this time succeeding in banishing the Daemon back to the Warp.[2]

Meanwhile, Signus Prime was utterly purged by the rampaging Blood Angels, but it was only after every daemon and cultist had been slain that the Blood Angels regained their senses. But Kyriss the Perverse still hoped to turn Sanguinius and offered him a deal: if the Primarch would give himself fully to the Ragefire, he would ensure that the Legion would be cured of the Red Thirst at last. Sanguinius, deciding to accept the sacrifice for the sake of his sons, was about to step into the Ragefire before Meros beat him to it. Kyriss was banished back to the Warp in failure while Meros was transformed into the Red Angel.[2]

The immutable wrath of the Blood Angels had left a shadow across the minds of the survivors who were able to raise the Red Tear and leave the planet.[2] Signus Prime became forever a place of darkness in their memories.[3]

The aftermath of the battle saw great fury from Horus, who for the first time tasted true defeat. Unlike at Isstvan III and Isstvan V where he had emerged victorious, and unlike at Calth where the Word Bearers still had achieved their ultimate objective despite a tactical loss, at Signus Prime nothing had been achieved. The Blood Angels had overcome all set before them and Sanguinius remained true to the Emperor. In his rage, Erebus chastised Horus for the plan's failure and the enraged Warmaster flayed the skin off his face with his own hands.[2]