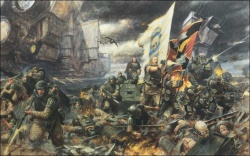 The Battle for Tyrok Fields was an early but major engagement on Cadia during Abaddon the Despoiler's 13th Black Crusade.[1a]

Despite the deteriorating security situation and internal strife in the Imperial territories surrounding the Eye of Terror in the prelude to the 13th Black Crusade, Cadia remained a beacon of stability. But in order to counter the increasing frequency and scale of Chaos activity around the Cadian sector, the Cadian High Command issued an order that every regiment of Cadian Shock Troops was to muster on Cadia itself. As a result, hundreds of extra landing fields were assembled at Kasr Tyrok fields in preparation for the reinforcements. Millions of men had already been assembled when the Volscani regiment, considered by many to be the most hardened fighters in the sector, landed on Cadia. In honor of the reputation of the Volscani regiment, the Cadian High Command itself gathered at Tyrok Fields to personally greet the arriving forces. However this would prove to be a disastrous decision for Cadia, as the Volscani soon revealed their true colors.[1a]

Exchanging their Cadian and Imperial banners for those of Chaos, the Volscani forces fired from their Leviathan super-heavy transports onto the unsuspecting Cadian delegation. The command Leviathan of the Governor of Cadia, Marlus Porelska was quickly destroyed, as was nearly all of the Cadian High Command as Tyrok Fields became a scene of anarchy and carnage. The Volscani troops, now barbaric followers of Chaos, poured onto the landing fields and attacked the shocked Cadians, pouring onto them with the savagery and brutality the Volscani had gained a reputation for.[1a]

Battle raged in the landing fields and nearby spaceport of Tyrok Fields for hours. It was here that Ursarkar E. Creed took control of the reeling Cadian forces, quickly restoring a measure of command and control among the anarchy. Creed would personally command Cadian troops in their counterattack across Tyrok Fields, isolating and destroying the outnumbered and surrounded Volscani forces, though only at great cost. As Creed fought over the bloody fields of Tyrok, the most trusted advisor to the Governor Secundus collapsed deep inside the fortress of Kasr Vazan, his body bloating and rotting in a way that indicated a plague of the Chaos God Nurgle. Kasrkin troops acted quickly, sealing the Fortress and all inside forever to avoid a major epidemic of plague on Cadia.[2]

In the aftermath of the battle, there could no longer be any doubt that the forces of Chaos were plotting a major offensive out of the Eye of Terror. Moreover, the Governor of Cadia and most of the high-ranking officers of the Cadian Interior Guard were dead. It was now up to Creed, now declared Lord Castellan of Cadia, to organize the defense against the inevitable Chaos assault.[1b]